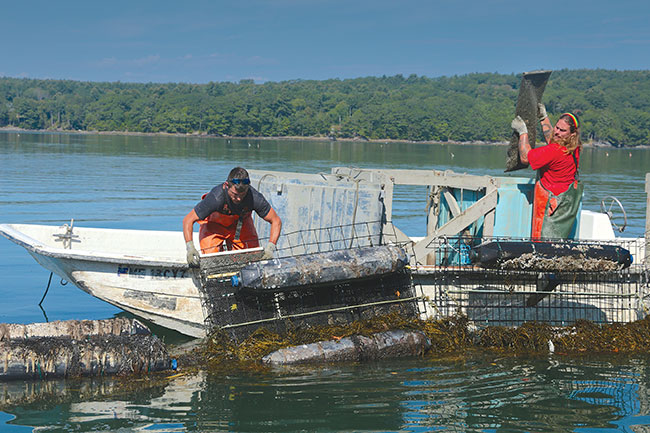 Aquaculture’s history is littered with examples of devastation as a result of the world’s changing climate. Be it ocean acidification or oxygen depletion, they have caused the deaths of millions of farmed marine animals in recent years.

Equally damaging are the impacts of extreme weather events, which are forecast to become more frequent as the earth continues to heat up.

In the latest analysis of the ocean’s warming temperatures released in January 2019, a group of scientists confirmed the acceleration of climate change. They noted that 2019 was the warmest year on record for the oceans and saw the biggest single-year spike in temperature in 10 years.

“It is a sobering reminder that human-caused heating of our planet continues unabated,” Dr. Michael Mann, Penn State University professor and member of the study team, told The Guardian.

While sea pen grow-out farms are constantly on the path of destruction resulting from extreme weather events, land-based fish hatcheries are not immune to the consequences of a warming global climate.

Water quality management is especially crucial at hatcheries, where fish are at their most vulnerable stage. As if the constant pressure of ensuring water quality is at optimal levels for larval development is not enough, the climate change variable that’s changing the nature of water sources is adding to the complexity.

“We’re seeing aquifers changing, we’re seeing heavy metal content changing all the time. The oxygen requirements, the level of water or the availability of water is going down across the board in all of our sources for our five hatcheries.”

A family-owned and operated aquaculture farm, Cedar Crest has been producing rainbow trout (Oncorhynchus mykiss) since 1995. More than six million fingerlings come out of its five hatcheries annually, making it the largest supplier in Ontario.

“Water quality is the pillar of everything we do,” Taylor adds. “Our hatcheries all have different water-quality parameters, some of them better than others. But we treat water as the living thing that she is and working with what the water can also do. You can’t use the same kinds of equipment on different water sources and expect the same results. They differ depending on the water body that you’re using.”

“The population is growing. The water resources are relatively finite. The manner in which we conserve water and employ water-treatment technologies is going to become more and more critical,” he says.

“As the water warms, the gulf streams and the currents are going to change,” adds Dan Martino, co-owner of Cottage City Oysters on Martha’s Vineyard in Massachusetts.

“We’re in the ocean, so that’s something that’s going to predominantly lay on us more and more. We’re going to have to figure out how to deal with that.”

Water-quality parameters all depend on the species one is farming. According to George Nardi, vice-president of Aquaculture Services at Innovasea: “The water quality requirements for shrimp are different for fish as they are different for molluscan shellfish (such as oysters). Good water quality for one cultured species, such as shrimp, would be considered poor for a species like European sea bass (Dicentrarchus labrax). So, knowing the water quality that one needs is rule number one.”

Knowing how to control water quality is rule rumber two, he adds. But he stressed that one must have the knowledge and tools to do so.

“That requires the removal of waste products, such as feces and carbon dioxide (CO2), through the filtration of solids from the culture water; control or addition of oxygen; stripping the water of unacceptable high levels of CO2 and nitrogen gas; and perhaps control of pH through the addition of buffers.”

Water treatment
In oyster hatcheries, water treatment emerged over the last couple of decades due to the need to make sure it’s not too acidic for the oyster larvae.

At Mook Sea Farm, owner Bill Mook started buffering the water in his hatcheries in the Damariscotta River in Midcoast Maine, “after ocean acidification reared its ugly head” in 2007 and killed millions of oyster larvae in the Pacific Northwest.

“Alan Barton (production manager of Oregon-based Whiskey Creek Shellfish Hatchery) came to Maine a year or two after [the crisis] and talked to a lot of people here, describing what they had gone through and what they figured out. This kind of gave us a little bit of a heads up but not before we lost about half of our production that year,” Mook says.

Buffering the water has proven inexpensive and effective for farmers in dealing with acidic water – for now.

“Our concern with ocean acidification now is at what point is it going to create a problem for us with oysters that are no longer larvae and have gone out of the hatchery? And I think that’s really an open question,” he says.

Brothers and farm co-owners Dan and Greg Martino believe that adapting an oyster management practice that Bill Mook implemented at his farm years ago might provide the answer. Mook’s practice is akin to what is now trending among Atlantic salmon farmers – hybrid RAS – where farmers are growing smolts bigger on land-based facilities so they spend less time in ocean cages.

In 2004, Mook developed a process for growing microalgae using fermentation technology instead of the traditional commercial hatchery technology that uses light. The proprietary process has proven to be more energy-efficient and cost-effective, he says.

“[The process] allows us to grow a lot more algae for a lot cheaper, and gives us the potential to cost effectively grow seeds bigger on land,” Mook says.

Planting bigger oyster seeds means they spend “less time in the gear and we’re able to harvest them sooner, run more oysters to our gear and the farm is overall more productive,” he says.

Mook’s incentive was to maximize the farm’s efficiency and the number of yield per acre per time on the farm’s leases. But he acknowledged that all these environmental changes that are taking place are “additional motivation” to grow seed bigger on land.

The Martino Brothers think that Mook’s process will be the future of oyster farming if conditions continue to deteriorate. “That will be a sad day but that may be true,” says Mook.

For now, what keeps Mook awake at night are the harmful algal blooms that have closed fisheries that typically don’t see closures. “It makes us very nervous. How climate change is impacting the observed increase in algal blooms is not well understood but my prediction is that there is a link. That’s certainly one thing that we’re keeping a close eye on.”