The Canadian division of the world’s largest salmon producer will soon have spent more than $40 million to build seven recirculating aquaculture systems (RAS) at its land-based freshwater hatcheries near Sayward, British Columbia in western Canada. 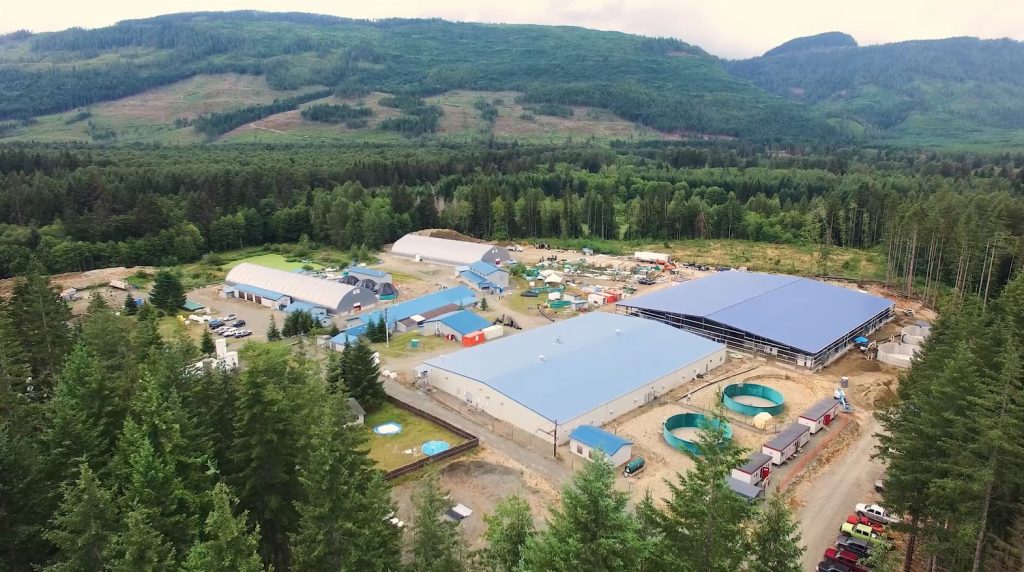 Two smaller RAS will supply water to 6m tanks for first feeders. Five larger RAS will have 14m tanks for raising smolts. In total, the new systems will provide 9000 cubic metres of rearing space, allowing Marine Harvest Canada to become one of the largest producers of salmon smolts in North America.

Marine Harvest Canada’s Director of Freshwater Operations, Dean Guest, says the beauty of the system lies in its simplicity.

It follows a design where 100% of water passes through 100% of the treatment system. The system was created by Marine Harvest staff, and as Dean boasts, it contains very few bells and whistles.

“It was surprising that a simple system that was inexpensive to build uses less energy than competing systems. We designed the system to be very simple and compact and the only automation is the oxygen system and the drum filter,” Dean says.

The design involved input from all our hatchery staff, fish health, and health and safety departments. These systems are simple to operate, have no side stream components, and have nearly eliminated the need for salt or other treatments.

InterAqua bio-filters are incorporated into each system owing to their ability to run continuously with vary stable performance. The systems were engineered by Pentair.

“When we realized how well the design worked, it was an easy decision to stick with this system. The only decision left to make was the commitment of significant resources to the freshwater phase of our business,” Dean says.

Building identical systems has created economies of scale for MHC. The construction crews have been able to move seamlessly from one system to another, and go back and forth with stages of the construction.

Marine Harvest has two hatcheries in Sayward some five kilometres apart, Dalrymple and Big Tree Creek. Their proximity and easy access from a main highway allows for sharing of resources required for a major build.

For the small contractors in Campbell River and the north island, the repetition allowed them to hire and retain tradespeople and skilled employees for a longer duration than normal.

To date, four systems are complete and holding fish. The 14m systems at Big Tree Creek are still being built and are expected to receive fish in July 2017.

The improved infrastructure will allow the company to increase the size of smolts at seawater entry up to 150 grams, giving them improved survival and growth rates. The smolts will not spend any more time in freshwater, but with space to grow and improved water chemistry, bigger smolts will be produced, thus shortening their time at sea. Finally it will allow Marine Harvest to grow more smolts and respond to any increase in industry capacity.

This investment in land-based recirculating aquaculture systems will improve Marine Harvest’s environmental performance and contribute to third party certification goals – the company plans to be 100% certified to the Aquaculture Stewardship Council standard by 2020.

Dalrymple Manager Lance Page says that salmon entering the new systems were introduced gradually, first 500, then 250,000, stepping up numbers as the flow of water and environment in the tanks was deemed suitable.

“Our hatchery employees were excited to get into the new buildings. As far as hatchery infrastructure goes, it is the best we’ve ever had and you can notice the ease of carrying out daily tasks around the tanks.”

“One of the design priorities was to minimize noise and clutter, thereby creating a safe and comfortable workplace. They’ve already measured the level of operating noise with good results.”

Lance talks about how Dalrymple started in the 1980s as a full flow-through site, raising 700,000 smolts per year in many small tanks and employing about 10 people. From now on, Dalrymple may produce up to five million smolts per year. There will be a workforce of 18 freshwater technicians who, thanks to automation and efficiency, can grow 10 times more biomass on the same site.

It will be a similar story at Big Tree Creek, which once construction finishes will grow between four and five million smolts per year. Big Tree Creek Manager Chris McNeill says the new 6m RAS they started using in January has surpassed all expectations.

“It is hard to believe it is a new system. It was the first new system we’ve had here since 2001, but it feels like an old friend. We’ve had low mortality and good feed rates,” Chris says. “There sense of excitement is building as we watch three construction teams race to finish the last three.”

Sayward has a small economy and a population of about 300. Between the two hatcheries, Marine Harvest provides stable, full time employment for 40 aquaculture workers.

Compared to flow-through systems, recirculation allows Marine Harvest to reduce energy costs and reuse water, it provides for more biomass with less use of water.

Marine Harvest Canada has developed and used recirculating aquaculture systems (RAS) since the late 1990s and its employees have pioneering knowledge of system design and operation.

There are five simple steps in the water treatment process:

• Oxygenation and ozone for disinfection.

• Treatment with ultraviolet to sterilize.