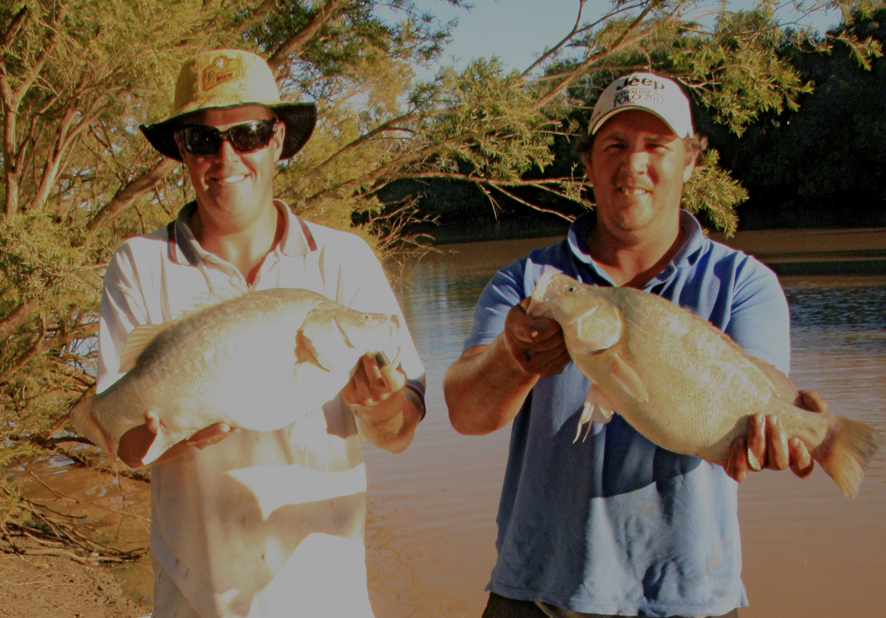 Fine examples of yellowbelly breeders. Each of these females would be expected to spawn over a million eggs. HI contributor John Mosig joins Matt Johnson and Andrew Shaw on their journey to the Lake Eyre Basin to collect broodstock for jade perch and yellow belly.

In long-established aquaculture sectors the supply of broodstock is generally selected from farmed fish. In the case of new species such as Australia’s jade perch (Scortum barcoo) new fish and genetic material still have to be collected from the wild. Hatchery International recently accompanied a couple of hatchery operators out to the Lake Eyre Basin on a broodstock capture trip.

Broodstock collection in the vast reaches of Australia requires a great deal of organisation and equipment. Matt Johnson of SEQ Fish and Andrew Shaw of Australian Native Fish Enterprises, both based in southern Queensland, have been combining their resources for some time now, and have their collection techniques pretty much down pat.

Starting out at 5:00 am, we left Brisbane against the early morning tide of peak traffic, and drove through the rich agricultural regions of the Darling Downs. We then piloted our way between the unbroken wave of triple-trailer road trains taking supplies out to the mining camps, before sitting back on the banks of the far Barcoo under a canopy of stars so bright you felt you could reach up and touch them. It was like having an impacted wisdom tooth removed. The trip took 13 hours.

The Barcoo is one of the rivers in the vast delta of the southwest-flowing river system driven by the monsoon rains. Known locally as The Channel Country, these rivers, when the rains are heavy enough, flow all the way to the huge inland sea of Lake Eyre. Fifteen meters below sea level Lake Eyre is saline, but when flooded supports a huge population of aquatic and bird life. During the dry season the channels become a string of water holes waiting languidly for the next flush of life-supporting rains. In El Nino times it may be two or three years between a flow.

It is these environmental factors that have made the jade perch such an exciting aquaculture prospect. The attributes required to survive under such harsh conditions include the ability to store enough energy to last through the tough times and a tremendous population recovery capacity. As a marketable farmed species jade perch have an extremely high omega-3 content, strong fecundity and fast growth rate.

The next day was go, go, go. The collection permit allows three nets per aquaculture licence, therefore six gill nets were set at one end of the six- kilometre long water hole. Once the last net had been set, the first couple were brought in, the fish removed, and the nets leapfrogged to the front of the set.

Two species were taken: the Lake Eyre yellowbelly (Macquaria ambigua) and jade perch. It’s believed that the Lake Eyre sub-species of yellow belly, also known as golden perch or callop, will take a food pellet, thus making this highly-prized eating fish a candidate for aquaculture. More work has to be done in this regard as so far, the sub-species has proved difficult to spawn in captivity. Several good breeding teams were collected and Matt and Drew feel confident that they can raise commercial numbers with the technology they’ve fine-tuned so far.

The fishing was good and by early evening they’d collected a considerable number of jade perch and yellowbelly. There’s no rest for the wicked in this caper. Once the numbers had built up in the carrier tank the water had to be changed every six hours, a final change first thing the next morning for the run back to the coast. In between all this Matt and Drew collected desert rainbow (Melanotaenia splendida tatei) from some of the last puddles in the less secure water holes; these to breed for their aquarium trade clients.

They were well pleased with the haul. “The genetic pool of jade perch held in captivity is very shallow,” Matt said. “We’re going into a science-based selection program and we’re expanding our genetic options with the continual addition of new fish. We’re already identifying family lines and we’ve been breeding from selected broodstock combinations for a couple of seasons now.”

There has been some concern that broodstock used in Asia from the Lake Eyre imported batches of jade perch fry represent only a very narrow genetic pool, but the results have tempered this concern.

“The original fish sent over were from a limited number of broodstock combinations, and this may explain why our overseas clients feel our stock performs better than the locally bred fry,” said Matt. “We growout a few ourselves for the local market and we’re certainly satisfied so far with the results from the program.”