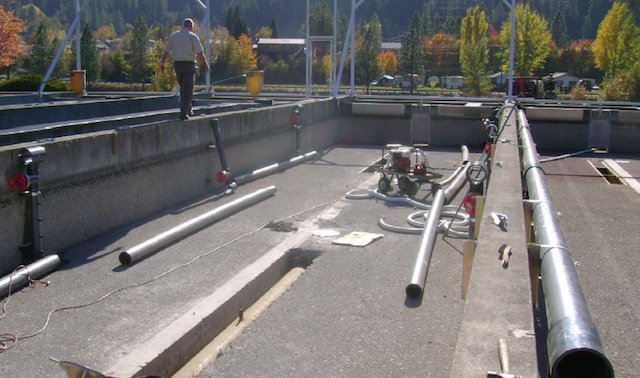 For many years concrete Burrows ponds have been used as a standard raceway system for rearing trout and salmon juveniles across North America.

They are an efficient use of space and can rely on gravity-flow, but compared to a circular tank design, Burrows ponds (BP) often do not provide enough flow to remove waste feed and feces from the tank. Indeed, you won’t find Burrows ponds in new hatchery designs and many facilities have converted their older ponds to raceways.

Studies have shown that removing solids from a rearing system can improve overall fish health and improve biosecurity (removing possible bacteria and viruses). In addition, increasing threats from invasive species such as the New Zealand mud snail require sufficient flushing action to remove them from the tank. But when there is not enough water flow and wastes accumulate in a raceway, personnel must spend time manually cleaning it out.

A recent study completed by the University of Idaho, the US Geological Survey (USGS) and The Conservation Fund looked at retrofitting BPs to better emulate a circular tank system and see if flows could be changed to improve flushing of solids. The answer is, yes they can.

The Conservation Fund’s Freshwater Institute was investigating potential improvements at Dworshak National Fish Hatchery (DNFH) in Idaho. As a potential improvement the Institute’s engineers designed a Mixed Cell Raceway (MCR) conversion as a way to upgrade the facility without the full cost of replacing the Burrows ponds.

“The cutting edge technology utilizes circular tanks, often coupled with recirculation systems, to allow more fish to be reared on less water,” says Mark Drobish DNFH Manager. “But the mixed cell conversion of the BP is a less expensive way of getting to the benefits of a circular tank.”

Hatchery personnel at DNFH assisted the researchers with the study. Two BP’s were modified and compared side-by-side with two standard Burrows ponds. Studies were done both with and without fish. (Dworshak rears two million steelhead smolts annually in their 84 Burrows Ponds.)

Retrofitting began with DNFH staff removing (cutting out) the center concrete wall in two BP. They then installed four circular drains evenly spaced down along an existing buried drain line. New water supply piping was also installed, connecting the existing inlets to new inlets in the corners of the new “cells.” Corner and side jets were created to direct water flows across the raceway and aid in the creation of circulating vortexes that flush water down the new drains.

To complete the job, the wet surfaces of all four test ponds were coated with “Krete Coat” to smooth out the original pitted concrete.

The result of the renovations is a mixed cell raceway (MCR) system. In this case, four cells of water circulating into the four center drains, were created. “The MCR renovation was able to create four self-cleaning circular tanks with excellent velocities from a relatively static Burrows Pond,” says Dr. Brian Vinci of the Freshwater Institute.

USGS researcher and inventor of the MCR system, Dr. Barnaby Watten, modeled the DNFH MCR design using computational fluid dynamics (CFD). The results were compared to field measurements of the hydraulic retention time (how long it takes for a complete turn over of water in the system), particle removal, and water velocities.

University of Idaho Professor Christine Moffitt and graduate student Kelly Stockton conducted the field measurements. Hydraulic retention time was determined by adding salt to inlet water and measuring the effluent conductivity, and particle removal was determined by adding plastic beads to imitate fish solids to the two systems and measuring time and amount of particle flushing. Water velocities were measured using an acoustic Doppler velocity meter on a grid pattern at critical cross-sections in both systems.

The results showed significant differences between the MCRs and the original BPs. Water velocities in the MCR were markedly stronger than in the BP (mean velocities 0.234m/s in MCR vs 0.168m/s for the BP), a difference of 40%. All velocities were low in the BP and in many areas were less than 0.15m/s and lower. Velocities were also much more evenly distributed throughout the MCR tank.

The stronger flows that were observed in the MCR likely contributed to the superior flushing action.

“This velocity gradient (in the original Burrows pond) was not sufficient to move the particles introduced into the system during the trials,” the study reported. The BP was only able to flush out 8% of the test solids – meaning that 92% of the excess food and feces would likely remain in the raceway and would have to be removed by hatchery staff. In the retrofitted Mixed Cell Raceway, 88.6% of the solids were flushed out, leaving only 11.6% of the waste to be removed.

There’s an additional bonus to the MCR: They may also produce fitter fish! The steelhead juveniles in the MCR were distributed across the entire raceway and could be seen swimming in and out of the current of each cell. Because fish in the standard BP congregated at the inlet jets and the areas of highest velocity, they didn’t move around as much. Opportunities for exercise can lead to better growth rates, muscle mass development, reduced aggression and increased survival in juvenile fish.

DNFH is now in the midst of a refit and staff hope to build full recirculating units so they have held off converting any more BP to mixed cell units. “You are working with 45 year old concrete,” Drobish points out.