From genetics programs to solar-powered processing, growers are improving the industry 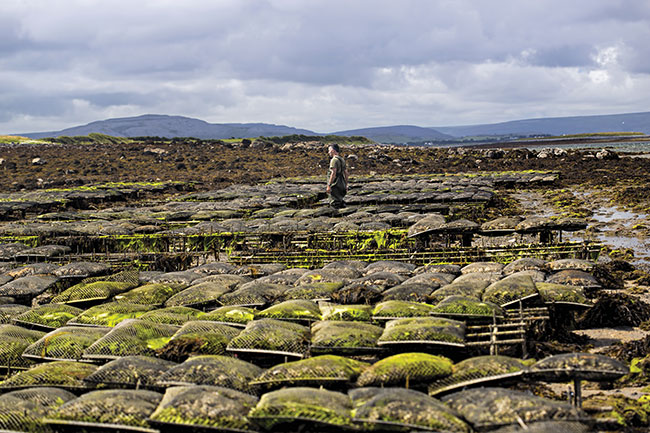 Genetics research and mechanization are playing a larger role in biosecurity and fish health.

In the last five years, Buchanan says much work has been done to build more sophisticated tools and be more thoughtful about breeding programs in the aquaculture industry.

“I think we have reached a critical mass where people are saying let’s build the tools, and they will come,” says Buchanan, president and CEO of CAT. “Our company’s focus is on how to take the examples from the cattle industry, where people will spend $80 per animal to genotype it because the animal is worth a lot. In aquaculture, we have thousands of animals, so let’s get 90 percent of the efficacy and do it for 25 percent of the cost, and many people will use it. It’s exciting to have these tools that we know work, and that are now cost-effective and available for use in shellfish.”

One of the pressing problems that the R&D centre helped address is the herpesvirus, virulent disease in Pacific oyster. “We’ve worked to create some resistance to that in the breeding programs,” says Buchanan.

Addressing oyster mortality
In British Columbia, a selective breeding program is underway to improve resistance to summer mortality syndrome. The three-year project will continue into 2022.

The project’s primary goal is to evaluate the level of genetic resistance to summer mortality in the B.C. Pacific oyster population and then recommend a selective breeding strategy that promotes resilience.

The project will produce 42 pair-mated families and evaluate their survival and growth rates in the field (at commercial farm sites) and in the laboratory under controlled stress conditions (e.g. temperature, Vibrio infection).

Even a modest reduction in mortality rates would grow the value of the B.C. shellfish industry by millions of dollars, said the Department of Fisheries and Oceans. Further, the development of a selective breeding program would enhance the industry’s sustainability and help safeguard the resource under the context of a changing marine environment.

Growers are also investing in technology to help with summer mortality syndrome by moving to shell-sorting devices that help eliminate dead shells.

“The (shellfish) mortality rising, and people are looking at that technology to sort the live and the dead cost-effectively,” says Jim Russell of the B.C. Shellfish Growers Association.

Work is also underway in the province to better understand the highly contagious norovirus, a leading cause of non-bacterial acute gastroenteritis in humans.

A $300,000-project by the Ministry of Agriculture and Genome B.C. is looking at genetic markers for the norovirus “to develop an early warning system to identify when norovirus may be present in the growing environment,” says Jim Russell of the B.C. Shellfish Growers Association.

The project aims to come up with farm-based, real-time monitoring systems that will serve as early detection tools for norovirus. This will minimize human illness associated with consumption of raw oysters.

Toward a better oyster
A $3.8-million project with Genome Atlantic and Genome Quebec is about to enter its next phase, according to Marc André Mallet of L’Etang Ruisseau Bar Ltée hatchery, the largest oyster seed supplier in the Maritimes.

The project aims to use genomics to produce the first selectively bred Canadian strain of the Eastern oyster.

“We’ve been working on a genetics program and about to see the fruits of that breeding program as we start selecting for traits we’re looking for,” says Mallet. “We’re starting to put it on a larger commercial scale, and it’s not only for us but for the industry as a whole.”

Mallet says growers are moving towards having a hatchery seed because it guarantees speed and productivity.

“We’re developing a larger gene pool, so if we were ever to have a disease in the Atlantic provinces, we could recover from that with the gene pools on hand. We will also have a better performing oyster that will get to market faster,” says Mallet.

The project has produced a high-density SNP chip to create a breeding program that will select certain traits to improve productivity and boost profitability.

“Despite COVID, we’re on schedule from the initial plan,” says Dr. Louis Bernatchez of the department of biology at the Université Laval in Quebec. “The first trials of this tool will happen in the next couple of months. It’s about getting faster growth for oysters, given we’re at the northern edge of distribution. It takes longer to grow an oyster of the same size as if you were to go down to the Chesapeake Bay.”

Climate-proofing the blue mussel
Prince Edward Island’s blue mussel production could double over the next 10 years from 50 million to 100 million pounds annually if the performance of blue mussels (Mytilus edulis) could be optimized. This is the goal of a genomics-driven initiative by Genome Atlantic, the PEI Government and PEI mussel producers.

The $800,000-project will sequence the genome of the blue mussel to establish a modern and sustainable breeding program hat will select traits important to growers, such as growth, stress-resistance and temperature resistance.

“The realities of climate change will push several bilogical limits of the blue mussel but genomics will help ensure that PEI mussels can become resilient to new environmental conditions,” said the collaborators in the project.

PEI is the source of 80 per cent of all mussels sold in North America. The selective breeding initiative “will allow the Island to retain its dominant position in the mussel industry,” they added.