Norwegian research institute Nofima says its scientists have “cracked the code” that enabled them to produce sterile farmed salmon. 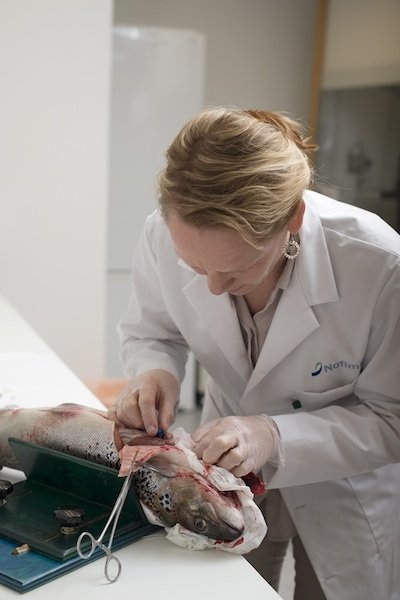 File photo of a Nofima scientist. The Norwegian research institute says its researchers have 'cracked the code' that enabled them to produce sterile farmed salmon

The breakthrough took the scientists 10 years to develop and affects only the fish’s ability to reproduce. “In practice we don’t touch the genes, but affect a protein that is necessary to enable the fish to produce gametes,” said senior researcher, Helge Tveiten.

They have not seen any indications that the fish will become sexually mature or develop the urge to migrate in order to spawn.

Research carried out on zebra fish identified a few genes that are decisive in the development of gametes, which paved the way for the research.

“The salmon we have researched do not develop gametes, and will never be sexually mature,” Tveiten added. “We see a tiny egg sac in the female fish, but no eggs are formed. The male fish develops what appears to be normal sexual organs, but they don’t have sperm cells.”

Tveiten’s work is part of the SalmoSterile research project, under the BIOTEK 2021 program financed by the Research Council of Norway (RCN). The project is a cooperation between the Norwegian Institute of Marine Research (NIMR) and several major industrial companies, including AquaGen.