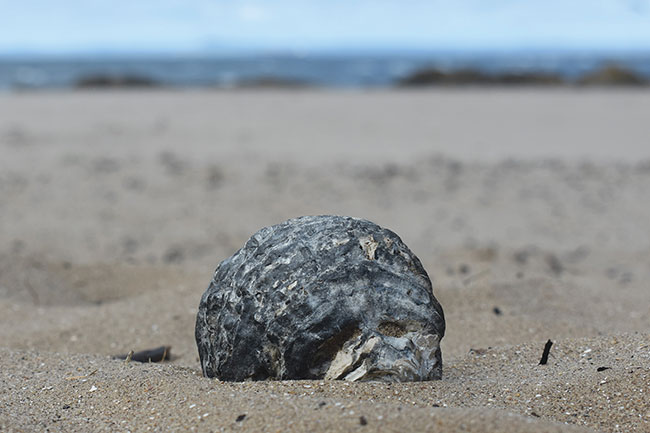 More than 20 years ago, oyster reefs were abundant in the Solent – a strait along the south coast of the United Kingdom (UK) that separates the Isle of Wight from mainland England. Around 450 boats collectively landed about 15 million native oysters (Ostrea edulis) each year at the end of the 1970s and the oyster fishery was once the largest in Europe. But in 2013, it was forced to close due to a combination of over-extraction, intertidal conditions, disease, pollution, and invasive species.

Now, a new restoration project established by Blue Marine Foundation (BLUE) is underway to relay oyster reefs in the Solent. As a collaborative effort with numerous member organizations, researchers and practitioners hope that the Solent Oyster Restoration Project will improve the chances for self-sustaining reefs to recover in order to improve water quality and marine biodiversity.

“This is one of the first large-scale oyster restoration projects established in the UK, which is really exciting,” said Dr. Luke Helmer, restoration science officer at BLUE. “Oysters have long been an important species for the ecology and industry of the south coast. At its peak at the end of the 1970s, the oyster fishery supported 450 vessels and 700 workers, while the ecological benefits and ecosystem services of oysters were massive. These have now been lost. We are very excited to see how things go in our efforts to restore these benefits.”

England’s first restoration-focused oyster hatchery
One of the project’s most significant milestones to date is the establishment of England’s first oyster restoration hatchery at the University of Portsmouth’s Institute of Marine Sciences. By providing a steady, reliable source of oysters, the hatchery hopes to overcome a major barrier to oyster restoration and enable research into ensuring disease resistance, without any loss of genetic variation or adaptation to local conditions. Hopes are high that it will play a key role in increasing researchers’ understanding of the ecology and biology of the native oyster and improve rearing techniques to enable more successful restoration across Europe.

The hatchery takes local oysters from the Solent and provides them with the optimal environmental conditions and diet to encourage them to breed. Oysters are kept at different densities in each 30-litre tank and fed a concentrated algal paste made from five algal species. Four parameters – temperature, salinity, pH and oxygen – are monitored, recorded and adjusted daily in order to maintain stable water conditions.

“The temperature is kept lower than 10 C (50 F) before the breeding season,” said Monica Fabra, PhD researcher and hatchery manager at the Institute of Marine Sciences. “Then, it is increased by one degree a day until it reaches 22 C (72 F). Above 13 C (55 F), the oysters start developing gonads and reproducing, and after a couple of weeks to a month, they begin to spawn. Temperature and food are the main triggers for spawning.” 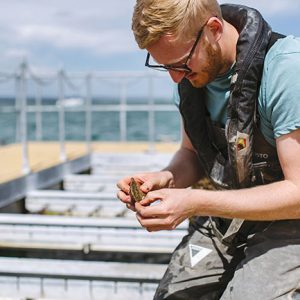 Dr. Luke Helmer monitors oysters, looking to rejuvenate the once thriving and abundant oyster reefs in the Solent straight, located in the south coast of the UK. Photo: University of Portsmouth 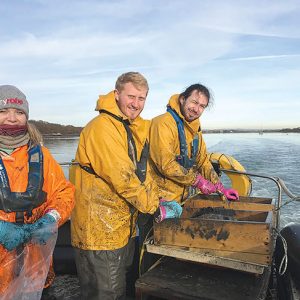 Study researchers conduct baseline surveys and screening of the oyster larvae, and release the ones that show no growth. Photo: Luke Helmer

Larval rearing
Depending on age and size, each oyster releases between one and two million larvae. These are collected with sieves and transferred to conical larval tanks. The water flows from the bottom to the top of the tanks (upwelling) to keep the larvae in the water column. It then flows to a big tank called a reservoir where it is filtered and heated before being sterilized by a UV lamp and returned to the larval tanks. A banjo filter (so-called because of its shape) is placed at the outflow of each tank to ensure that the larvae are not lost in the system. The larvae are fed daily with live microalgae. Water temperature is kept constant.

“Every other day we clean and disinfect the tanks, and perform a screening of the larvae, releasing/eliminating the ones that do not grow,” said Fabra. “After 10 to 14 days, the larvae should reach the settlement size.”

A new home
When the larvae reach the pediveliger stage, they are either moved to settlement tanks or left to settle on cultch – old oyster or mussel shells – in the larval tanks for two or three days. The spat set on cultch (called spat-on-shell) are then moved to the nursery area outdoors, where they can be reared until they get bigger in size (2 to 3mm). Then they are translocated to restoration areas, where they are deployed on the seabed.

“The shortage of larval supply, due to the absence of strong breeding populations, is not the only barrier to the recovery of oyster populations,” Fabra revealed. “The lack of suitable settlement substrate, alongside many other stressors such as predation, can reduce the larval survival and recruitment, jeopardising the success of oyster restoration projects. We let the larvae settle on a suitable substrate before deploying them, increasing the chances of them growing and surviving in their natural environment.” 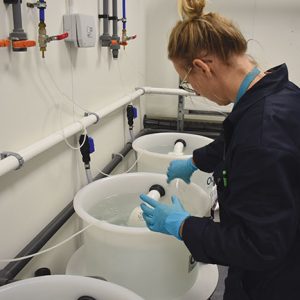 Moving forward, Helmer, Fabra and their team will continue to conduct experiments and assess the oyster reefs to see how they develop. Photos FIONA Woods. 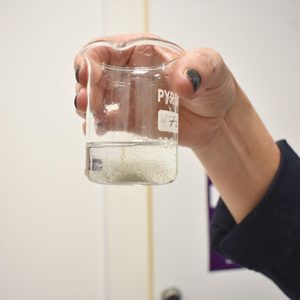 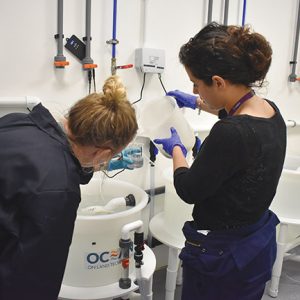 Keys to success
Fabra is also investigating the genetic implications surrounding the employment of locally adapted broodstock from disease-affected areas, for the hatchery production of oyster seed.

“The Solent is an area affected by the disease Bonamiosis, which is caused by the parasite Bonamia ostreae”, she said. “Our oysters have already been exposed to the disease, therefore they may have adapted, developing resistance on a population-wide level.”

The use of local oysters may also allow a higher post-deployment survival of oyster juveniles, because of the physiological adaptation to local environmental conditions, believes Fabra.

“An oyster may be disease-free and healthy,” she said, “but if it is translocated from one region to another and not adapted to local conditions, there is a higher risk of death.”

Genetic diversity and potential disease-resistance are monitored during the whole production process by collecting samples of larvae and oyster tissues from the adults.

“One of our strengths is that we use broodstock from the Solent and translocate the new spat to the same area,” said Fabra. 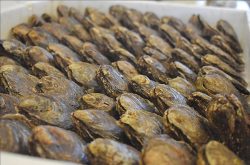 “The oysters that we are using have been exposed to conditions in the Solent for a number of years, and have a genetic line that provides some adaptation to those conditions,” he said. “Local broodstock are much more likely to adapt best and survive.”

Helmer, meanwhile, believes that other marine life will benefit from more oysters in the Solent. A single oyster can clean almost 200L of seawater each day, improving water quality and clarity. They can also act as nursery grounds for fish and protect saltmarshes and other fragile coastal ecosystems.

“Our research has revealed an incredible diversity, and we have identified up to around 130 different species, including pipefish, sea scorpions, critically endangered European eels, seahorses, common prawns, several crab species, and lots of amphipods,” said Helmer. “Species like barnacles and ascidians also like to attach to oyster shells. Oysters are ecosystem engineers and we have seen this very much over the past few years.” 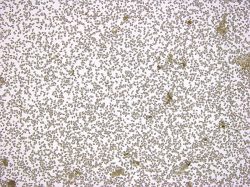 Helmer, Fabra and their colleagues are among the first to attempt a restoration project of this scale in Europe. Going forward, Helmer explained they will be deploying the spat in several ways, conducting more experiments to determine the best way of on-growing the larvae, and assessing the oyster reefs to see how they develop. The team is also aiming for an integrated approach to combine restoration efforts of saltmarsh and seagrass habitats with oysters to benefit the entire ecosystem.