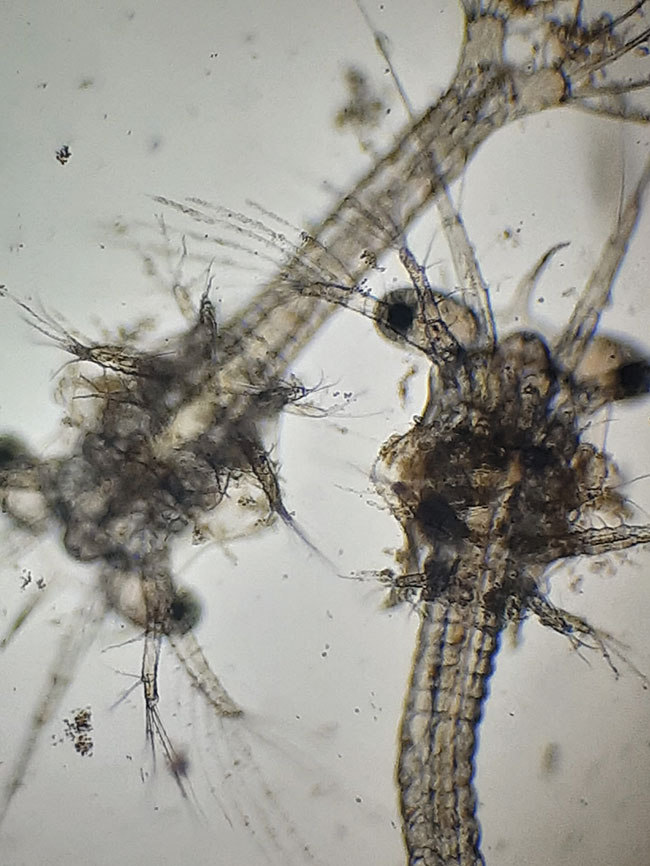 Biofloc technology shines as an example of perfect symbiosis.

When intensive shrimp farming systems limit water exchange and increase stocking density, nutrients develop into a community of microbes. Bacteria multiply in so-called flocs, which also contain fungi, protozoans, algae, and nematodes – a food fest for shrimp. In turn, bacteria get their energy and nutrients by detoxifying shrimp waste products.

That is because biofloc technology (BFT), used especially in Asia and South America to raise tilapia as well as shrimp, relies on expertise more common among water treatment specialists than fish farmers, says De Muylder. Before more hatcheries can adopt BFT – applauded as environmentally-friendly but appraised as challenging – producers will need a greater comfort level.

Emerging tech
In the mid-1970s, as Americans, Japanese and Europeans grew ever-hungry for shrimp, large-scale commercial shrimp farming multiplied in Ecuador and Taiwan. These early leaders served as technology role models for the Americas and Asia as farming expanded. By 1989, China had emerged as the dominant producer, according to the Global Aquaculture Alliance.

But in the early 1990s, shrimp farming hit a roadblock as viral diseases, saltwater intrusion, pond effluents, and environmental destruction mounted. Biofloc technology offered a big part of the solution, according to Bob Rosenberry, the retired publisher of Shrimp News International who wrote about aquaculture for 40 years.

Rosenberry described biofloc technology as “a marriage of Asian intensive shrimp farming and American science… with bits and pieces of successful technology from around the world,” including France and Israel.

In essence, this approach allows farmers to produce more seafood with fewer resources, including water, feed, space and money for filtration systems. In addition to being more environmentally-friendly, it earns kudos for profitability.

In fact, research with shrimp and tilapia suggests that for every unit of growth derived from feed, an additional 0.25 to 0.50 units of growth are produced from microbial protein in biofloc systems, writes Dr. John Hargreaves, an independent aquaculture consultant, in his 2013 article, Biofloc Production Systems for Aquaculture. “This benefit is reflected in improved feed conversion, one of the best predictors of system profitability and business sustainability,” he adds. 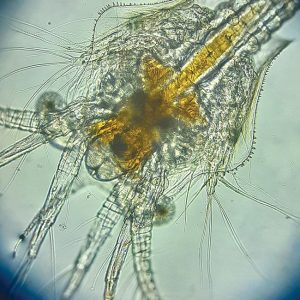 Biofloc has provided solutions to some of the biological challenges of shrimp farming. 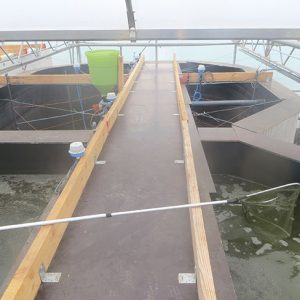 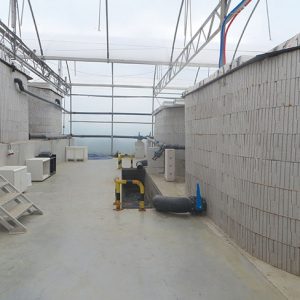 Global research
Although biofloc production dates back decades, in more recent years, scientists worldwide have been exploring its application to closed hatchery culture, especially of shrimp.

From egg to adult, the development of Pacific white shrimp (Litopenaeus vannamei), also called white leg shrimp and King prawn, occurs in only 120 days, yet there are many distinct phases throughout its lifecycle.

After hatching, a shrimp experiences a metamorphosis period – six nauplius stages, three zoea, three mysis – and a postlarvae (PL) period identified with a number that indicates the days it has been in that post-metamorphosis phase. (Age signifiers, such as PL10, PL15, PL20, are also shorthand for size.)

“Little is known about shrimp at larval stages including nauplius, zoea, and mysis, when shrimp are susceptible to bacterial diseases due to their underdeveloped digestive and immune systems,” according to British researcher Dr. Corey Holt and his colleagues, who are seeking to understand the role of the shrimp gut microbiome in health and disease.

At the critical hatchery period, shrimp are susceptible to physical, chemical and biological stressors, note Dr. Marco Antonio de Lorenzo and his fellow researchers in Brazil. Then, when they are sent to the culture farms, they must be strong enough to withstand the processes of transfer, stocking and adaptation to a new environment.

In 2015, these Brazilian researchers honed in on the period between mysis and PL5 and found that hatchery performance for Pacific white shrimp in a zero-exchange biofloc system is equal to that of a conventional system.

Confirming those results recently, Dr. Felipe Vieira notes, “This is a very good result, in my opinion, since the water use in biofloc was lower than the traditional system. For adults, we know that the biofloc can improve shrimp health.”

In 2016, Malaysian scientists followed up with a study on the microscopic composition of bioflocs in a closed hatchery culture system, providing insights into what happened in 105 days. They concluded that the microscopic organisms served as food supply, algae grazers, water stabilizers, and decomposition agents and maintained the water quality “in optimal condition.”

A 2018 study in Mexico assessed the effect of adding commercially available probiotics during the nursery phase at a zero-exchange biofloc shrimp farm. Although controlled laboratory tests had yielded promising results, this trial on a commercial farm did not improve the shrimp production.

Commenting recently, Dr. Anselmo Miranda-Baeza, one of the researchers in this study, notes that today some companies in Mexico and parts of Latin America carry out a pre-growth phase in BFT systems that have better production results than those that do not. Although it is difficult to estimate precisely, he cites a 30 per cent improvement.

“These producers guarantee greater survival and can reduce the cultivation times in open ponds, thus reducing risk,” he adds.

Many researchers say BFT is effective in this nursery phase between hatchery rearing and grow-out because continuous consumption of biofloc provides better nutrition.

The ammonia challenge
On the other hand, a point of dispute among researchers is how to manage ammonia in biofloc systems. One school advocates adding inexpensive carbohydrate sources, such as molasses, dextrose or tapioca, to foster proliferation of heterotrophic bacteria, which will synthesize ammonia and maintain water quality.

The manipulation of the C/N ratio has been the focus of much study.

The drawback of that approach, experts agree, is that it heightens production and accumulations of bacterial solids, which may ultimately cause gill clogging. To resolve the issue, a system must add capacity to remove, treat and dispose of accumulated solids.

Shrimp feed specialist Eric De Muylder launched the first commercial shrimp farm in Belgium after years of research into an alternative to this method of ammonia management. He favors nitrification.

This approach uses the nitrifying bacteria that are attached to suspended solids and the culture unit itself. If the biofloc system is well mixed and aerated, this mechanism of long-term ammonia control develops naturally without carbon supplementation.

“There are a lot of ways to run a biofloc,” De Muylder notes.

In addition to growing out shrimp at his farm, which is called CreveTec, De Muylder also uses biofloc in the PL2 and PL3 stages during the last week of the hatchery process. At this point, most operations would opt to change the water, he says. “It is too complicated for them.”

But, working in a zero-exchange environment, De Muylder deploys biofloc during this stage.

“It works when these small shrimp are consuming plankton,” he says, referring to the phytoplankton, zooplankton and nematodes grazing on the bacteria.

Compared to clear-water culture that utilizes antibiotics, De Muylder believes this approach builds stronger immune systems and better survival of shrimp. He says, “Shrimp like a bit of turbidity. It gives them something to do.” 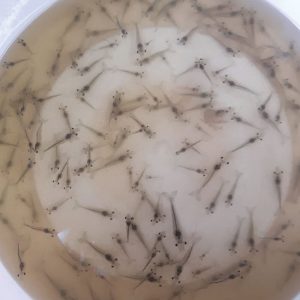 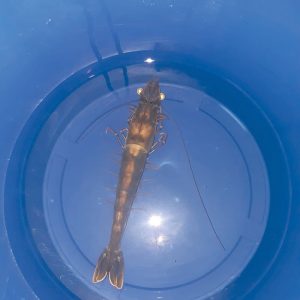 Adoption hurdles
Among the main limitations for the growth of this technology are the lack of trained personnel, the level of investment necessary to install biofloc systems, and the low price of shrimp in the international market, says Miranda-Baeza.

Hatcheries could gain the expertise to culture shrimp more effectively using biofloc technology through a stronger understanding of the biology of water treatment systems, according to De Muylder.

Dr. Andrew Ray echoes the concern about the skills needed to make biofloc technology successful. With colleagues at Kentucky State University, he has studied clear-water RAS versus biofloc systems to raise shrimp.

In contrast to the large-scale outdoor shrimp farms in Asia where external biofilters would not be economically feasible, he counsels small, artisanal U.S. farmers operating in well-ventilated, insulated facilities. For them, he says, operating an external biofilter is the simplest way to resolve the issue of ammonia accumulation, although biofloc is an alternative some farmers use.

“Due to the relative complexity of the biofloc approach, it has been difficult for new aquaculture farmers to implement,” Ray says. “Putting on that external filters gives them a lot more control. And I’ve seen that work better for them.”