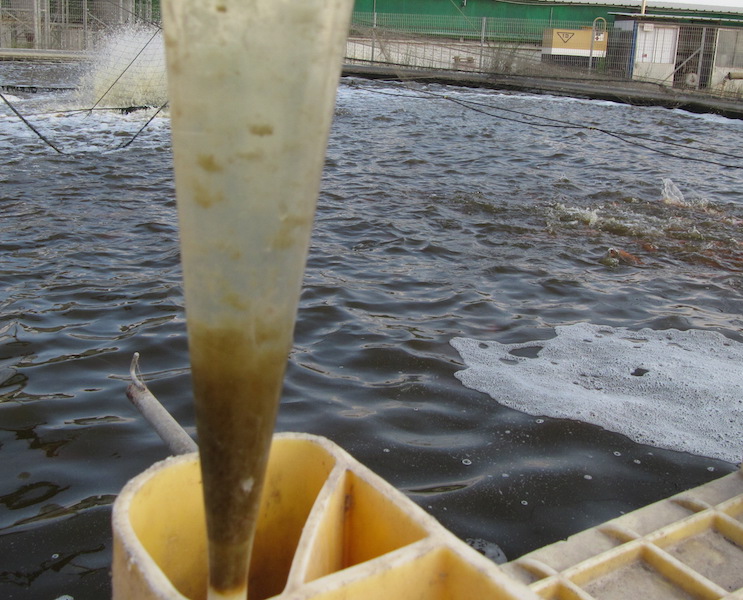 In March 2000, 15 years ago, this journal published my article on “Active Suspension Ponds, a New Concept in Water Treatment.” Since then this concept and technology have developed. It is now known as Biofloc Technology and is practiced worldwide in shrimp – and fish production systems, hatcheries and nurseries. Our Biofloc Technology Guidebook has been published and is now in its third edition.

One of the intrinsic features of natural aquatic ecosystems is the almost complete recycling of feed materials through the biological food web. Fish excretions are metabolized by microorganisms, harvested in turn by planktonic organisms (possibly recycled internally, e.g. algae harvested by zooplankton) and eventually back to the fish. This feature is still essential in extensive culture ponds, but its role declines as stocking density (pond intensification) is increased.

The organic load in the more intensive ponds is high, and a large fraction of the organic matter settles onto the oxygen-limited pond bottom, creating anaerobic conditions, slowing down the bio-recycling sequence and even leading to the production of toxic compounds. In addition, the high feed load, stratification, and limited oxygen supply will lead to the inhibition of nitrogenous waste metabolism, including the build-up of ammonium and nitrites, both of which are deleterious to fish. The resultant low rate of bio-recycling led to an inability to increase intensification and lower feed utilization.

The aquaculture industry is motivated to move toward intensification owing to several reasons. Conventional extensive- and even semi-intensive production systems demand an abundant supply of water and large tracts of land, mostly near the shore or close to available water supplies. Such land is already under high pressure for residences, agriculture, industry, tourism and nature preservation.

Intensive culture systems, requiring minimal water exchange, utilize just a small percentage of the water and land required for the same production in extensive systems, and are thus the more affordable and sustainable means of raising fish. Other important reasons for intensification are the demands of bio-security, minimizing release of drained water to the environment, quality control transparency and profitability.

Bio Floc Technology (BFT) is based upon combining the fish and microbial community within the same pond, and should be considered as an ecosystem management technology. Metabolites excreted by the fish are treated within the pond, with no need for a separate water treatment component. A very dense microbial community develops when water exchange is limited and organic substrates are allowed to accumulate. Typically, we find 10-1000 million microbial cells (107-1010) in 1 cm3 of pond water.

One essential feature needed to maintain proper conditions in such loaded systems is proper aeration and mixing. We should aim at having the whole waterbody at a high oxygen level, and minimize the accumulation of solids that turn to anaerobic environments. We badly need better planning of ponds (be it for ponds measuring just a few hectares, or small tanks used in hatcheries and nurseries). I do hope that the industry will demand such developments.

It is possible to control inorganic nitrogen build-up by adding carbonaceous materials (carbohydrates such as molasses, starch, tapioca and others) to adjust the C:N ratio in feeds (or in the pond) to 15-20. Under such conditions, microbes take up the ammonium from the water and produce microbial protein. By adjusting the C:N ratio, the nitrogen problem can be easily and consistently solved as I have described elsewhere.

The important feature of BFT is its ability to recycle proteins. In conventional aquaculture, only 15 to 25% of feed protein is actually retained by the fish or shrimp. The rest is excreted to the water, mostly as ammonium. In BFT systems the ammonium is converted to microbial protein that can be used as a protein source. The micro-organisms in the water tend to aggregate and form bio-flocs that can be filtered and consumed by fish (tilapia and others) or shrimp. Protein utilization rises from 15-25% in conventional ponds to 45% in BFT. This doubled feed-efficiency is a very important factor, especially now, when feed costs are rising.

Extensive work had been done on the composition and nutritive value of the flocs, demonstrating the presence of more than 30% protein containing essential amino acids in useable quantities. In addition, the microbial flocs contain vitamins and trace metals enabling the farmer to omit them from the feed.

Another feature of feeding with bioflocs is the fact that the cultivated animals are feeding 24 hours a day. Shrimp and fish are found to have their digestive tracts filled with feed, as bioflocs, even following a night with no conventional feeding. This may be especially important in the nursery phase.

The utilization of microbial flocs as a source of protein reduces expenditures on feed. I have shown that feed cost for tilapia production was lowered from $0.84/kg fish in conventional ponds to $0.58/kg in BFT systems. Feed costs of the lowered protein diet in Belize Aquaculture was about 50% of that in conventional shrimp farming.

Bioflocs comprise a wide assemblage of bacteria, algae, protozoa and other zooplankton organisms, perhaps as many as 1000-2000 different species. As yet we do not know enough about the composition of the bioflocs, nor our ability to affect it and the different effects it may have on fish production and on the eco-stability of the system.

It has been shown that the immune systems of shrimp are enhanced in the presence of bioflocs and there is a lower incidence of diseases among shrimp grown in biofloc systems. We have demonstrated the probiotic effects of bioflocs against Streptococcus infection in tilapia. Research on the effects of bioflocs on diseases is actively ongoing, and we can expect getting more on how to use this system to curb diseases.

Interesting new results demonstrate the effects of bioflocs on the fecundity of both shrimp and tilapia: in both cases the number of eggs per female were about doubled. We do not know exactly the mechanism of this effect. It is possibly caused by the high quality of the biofloc feed components, better water quality, or the presence of hormones (or of components having hormonal effects).

Biofloc technology has become a common way of running hatcheries and nurseries. Moreover, biofloc systems are environmentally friendly due to the fact that there is almost no release of nutrient rich drainage water to the environment.

Yoram Avnimelech is based at the Technion, Israel Institute of Technology in Haifa. He is the author of Biofloc Technology – A Practical Guide Book published by the World Aquaculture Society. For more information, and a comprehensive reading list contact him at: agyoram@technion.ac.il