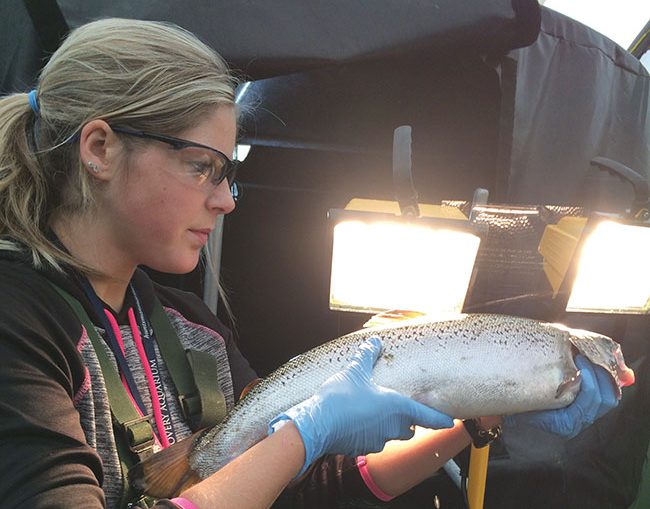 North American Atlantic salmon aquaculture, like other aquaculture sectors, has already benefited greatly from selection of better-performing stock over time. However, genomic selection promises to substantially speed up the rate of genetic improvement in breeding programs.

Genomic selection predicts the total genetic merit of individuals for key traits via the use of genome-wide genetic marker data.

“The use of a selection index can then be used to ascertain the cumulative genetic value of an individual,” explains Dr. Klara Verbyla, director of genomics & breeding at the Center for Aquaculture Technologies (CAT). “This approach has already been shown to be highly effective in aquaculture species, with the potential to double to rate of gain for some traits.”

Genomics data can also be used to monitor genetic diversity and levels of in-breeding across any type of breeding program, says Verbyla. It also removes – for the reconstruction of pedigrees in family-based breeding programs – the need to physically track genetic families of fish.

Dr. Amber Garber at HMSC, leading the project with Dean Guest (freshwater director for Mowi Canada East), first explains that this project builds on previous work going back to 2010.

From a specific genetic line of broodstock, the team has already collected thousands of data points and fin clips to support a selection program at the “family” level. This project will go much further in enabling selection of broodstock with improved traits on an individual basis, with a large number of markers involved. They relate to three trait areas: better general fish performance (including body weight and fillet colour), resistance to sea lice and improved tolerance to changing water temperatures.

A look back
As mentioned, Garber and her colleagues have been collecting fin clips from parents that were produced starting in 2006. “At that time, there was no specific plan to use the fin clips,” she notes. “They were archived, providing a very powerful biobank of genetic material. Therefore, while we are moving forward in time with this project, we are also able to use the historical phenotypic and now genomic data at any time-points of interest.”

The family-based selection program has so far resulted in improvements across the generations. Some of the fish hatched in 2010 were used to create the generation hatched in 2014, repeating again in 2018 and again this year. “We have challenge test data, harvest data and performance data on candidates across each of the year classes,” Garber explains.

In addition, she says “we have tested techniques developed in other facets of Huntsman research and scaled them up – to test at the level of a breeding program – resistance to Saprolegnia parasitica.”

How much improvement individual genomic marker-based selection will provide in breeding programs compared to family-level selection is not certain at this point. Garber can say, however, that she and her team expect markers of significance for the year classes of 2010, 2014, 2018 and 2022 to differ somewhat from the next. As well, differences in the site environments in which these fish were (and are) raised could impact the specific markers relevant to this project.

Resistance to sea lice
Analysis of data from other Mowi populations of Atlantic salmon (of European origin) suggests that sea lice resistance is controlled by many genes of small effect that need to be selected simultaneously in order to see an increase in resistance. Garber and her colleagues expect this to be similar in their North American Atlantic salmon study population.

“For every year class, we run controlled sea lice challenge tests on siblings of individuals (candidates) who will later spawn, creating eggs and milt for the next generation,” she explains. “Without genomics, this data allowed us to identify families that are more resistant and families that are less resistant to sea lice, and to select unchallenged candidates from the most resistant families.”

However, there is individual variation in resistance to sea lice within families, which is captured by layering on genomic information and taking advantage of the knowledge these scientists have of the fish family tree, stretching back multiple generations. 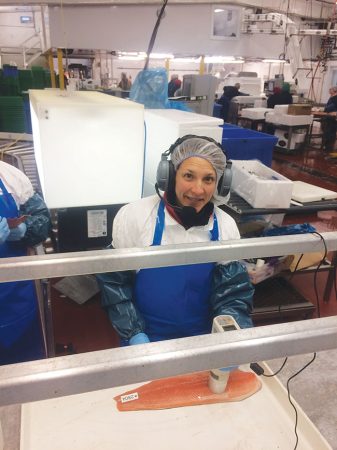 Tolerance to water temperature changes
This team’s first published paper on tolerance to temperature changes validated the appropriate method to explore Atlantic salmon survival in increasing seawater temperature that also mimics conditions in sea cages. Heritability of the trait was addressed in another paper. This work formed the basis for Master’s student Charlotte Bartlett at University of New Brunswick, co-advised by Garber and Dr. Tillmann Benfey.

Looking forward to what they will discover about water temperature tolerance, Garber says it’s quite possible that tolerance/performance in warmer and colder temperature are different traits, and they may be correlated positively, negatively or not at all.

Early maturation
Genomic selection also provides an efficient solution to the perennial issue of early maturation in Atlantic salmon, a situation which can lead to reduced growth, poor flesh quality and mortality.

A few years ago, Dr. Tiago Hori, who was then CAT director of genomics, found in collaboration with Cermaq Canada, that genomic selection could lead to late-maturing selection accuracies of greater than 40 per cent. Hori noted that genomic selection will only be feasible for this purpose, however, if costs can be reduced by using a combination of high-density (HD) and less-costly medium-density (MD) marker panels.

Verbyla notes that nowadays, MD panels are key to efficient genotyping in many aquaculture breeding programs and that they can be used in two ways.

One is as a low-cost primary panel where genomic selection can be applied with only several thousand markers – but she says this can still provide a substantial impact on the accuracy of selection and rate of genetic gain. The second is to use an MD panel with imputation of the MD marker data to an HD panel.

Garber and her colleagues will actually be exploring the use of a low-density panel with imputation to an HD panel, while optimising the group of individuals to genotype at high density as candidates for spawning. This approach had already been used elsewhere in selective breeding programs, and was already trialed within the program with existing phenotypic and genotypic data available.

In terms of cost, Garber explains that the feasibility of genomic selection with HD genotyping is very much dependent on a company’s investment level in genomics.

“Mowi has implemented genomics in all of its other business units farming European salmon,” she says. “This project provides the perfect opportunity to explore the genetics of economically-important traits whilst simultaneously developing and optimising a cost-effective genotyping strategy that can be immediately adopted by Mowi Canada East at project end.”

Biggest challenges
The traits involved in this project are expected to be complex. Garber explains that with the generation period for Atlantic salmon being four years over that period, “there can be changes to the present environment of the Atlantic salmon where they are farmed, changes in the technology in which they are farmed, changes in the diet they are fed, and very likely changes in sea lice with a much shorter generation period, amongst many other factors such as variable family response by life stage.”

The team is using that generational knowledge of these specific Atlantic salmon, as well as global genomic knowledge of Mowi Genetics (research lead Dr. Serap Gonen) to structure the challenges. They’ll get solid genomic data while also enabling further description of the complex nature of these traits.

Verbyla explains that genomic selection has already been demonstrated as a game changer for a range of aquaculture species across a range of traits including growth and disease resistance.

“As more programs seek to utilise this technology, expanding the set of traits targeted, further improvements in productivity, efficiency and sustainability will be achieved, benefitting not just the individual programs but the industry as a whole,” she says.