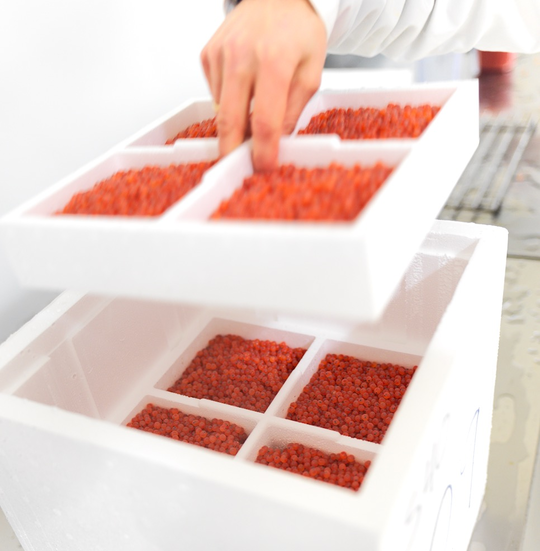 Iceland-based Benchmark subsidiary, StofnFiskur, will supply nearly 40 million salmon ova over the five-year term of the contract with AquaCon, according to a press release from Benchmark.

“The agreement confirms and consolidates Benchmark’s strong position as a genetics supplier to land-based farming worldwide,” the company statement said.

Benchmark Genetics has been producing broodstock and ova for land-based fish farms since the early 1990s.

“As a leading supplier to land-based farming, we have gradually gained comprehensive experience in securing deliveries to destinations all over the world. Since we keep our broodstock on land and thereby have full control over the maturation and spawning, we are in the position to produce and deliver ova to customers every single week of the year. The term ‘egg season’ is outdated with us,” said Geir Olav Melingen, commercial director at Benchmark Genetics.

Security of supply was essential factor for AquaCon’s selection of its egg supplier, according to Pål Haldorsen, CEO of AquaCon, based in Oslo.

“We have chosen to secure genetics at an early stage, as we consider ova as a key strategic success factor of our ambitious growth plans,” he said in a statement. “Our production plan presupposes regular deliveries of ova throughout the year, and Benchmark Genetics has a production model for land-based broodstock that makes us confident that we will receive deliveries following our plans.”

Located on the southwest shore of Iceland, StofnFiskur’s land-based facilities have no other salmon farms nearby. The intake water, both freshwater and seawater, comes from boreholes and is entirely pathogen-free, Benchmark explained. StofnFiskur’s four farms are approved according to the OIE compartment standard, meaning that the zones around each farm are defined as entirely isolated and protected from external disease threats. Benchmark Genetics is the only genetics company approved by Sernapesca for export of ova to Chile.

“The unique location and production model makes us confident that we can deliver eggs that have the highest biosafety standard to AquaCon,” said Melingen.

Benchmark Genetics believes that significant parts of the future growth in salmon farming will come from land-based production, leading the company to develop production concepts and products that are adapted to the specific needs of the land-based fish farming sector, the company said.

“The genetic weighting of growth and quality traits forms the foundation of our product, SalmoRAS4 +. Besides, we have also developed methods in the production of broodstock that produce offspring that will not become sexually mature. This means that operations like AquaCon can produce at higher temperatures to optimize growth,” says Melingen.

He expressed optimism that land-based farming will achieve more competitive production costs in the future compared to traditional sea-farming.