Like any gem, pearls may be associated with luxury and superfluous income. A pearl farm in Thailand has been showing that there are more to the facets than these. 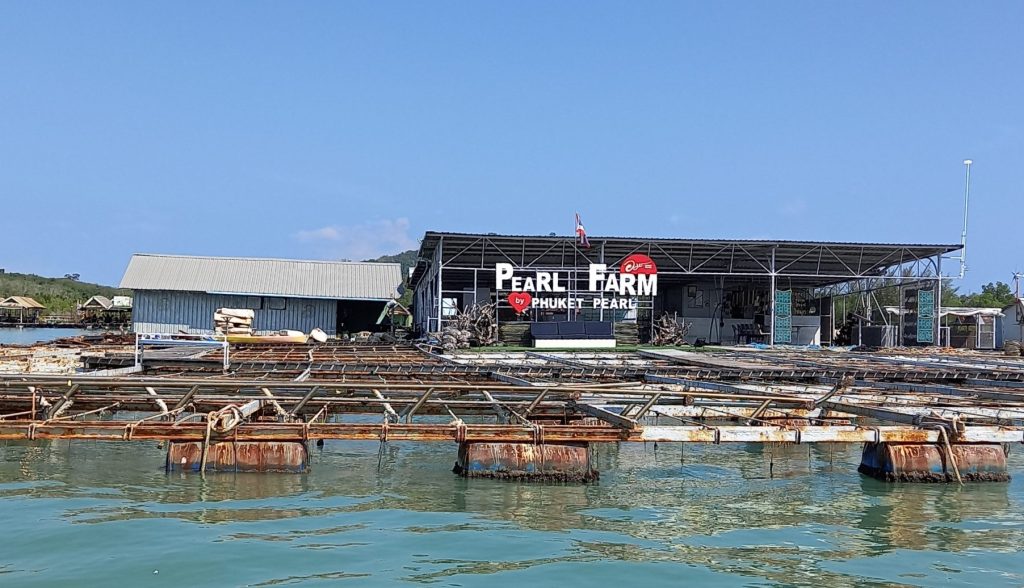 Phuket Pearl, located in Sapam Bay, has been educating the public on pearl production for the past seven years. (Photo: Ruby Gonzalez)

It is immediately visible in the horizon from the wharf at the Sapam Bay, on the east coast of Phuket Island in Thailand. A few hundred meters boat ride gets you there. The reception/demonstration area is hoisted by pontoons. In the unpretentious floating cages surrounding the area are where arguably the most precious creatures thereabouts are being cultured.

Welcome to the two-acre Phuket Pearl Farm, which produces AMORN pearls that have studded many a crown of beauty queens in Thailand and elsewhere. Needless to add, this is a recognition of their pearl culture technology, quality and design. 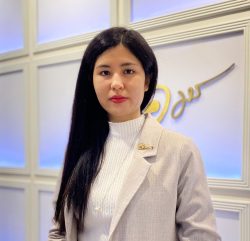 “The unique trait of Phuket Pearl is the long experience of the family-owned pearl business in cultivation, design and manufacturing. This consists of a pearl farm, factory and ready-to-wear pearl jewelry pieces. We ensure our pearls are within our Phuket Pearl’s five-factor quality control chart along with the wide range of designs,” says Rattikorn Intorncharoen. She belongs to the fourth generation of the family who founded Phuket Pearl, where she is an executive board member.

The history of Phuket Pearl started in 1967 with her great-grandfather.

The farm’s proximity to the high-population mainland could be deceiving. The location actually benefits from key factors required in culturing high-grade pearls.

“Sapam Bay was selected as the farm location due to the quality of the water, which includes constant flow of the water changing in the area due to high tides and low tides,” she explains. “The good water temperature of around 26 to 29 centigrade and daily tides bring in the nutrients and optimizes the plankton’s quality. These ensure the oysters get a good source of nutrition of plankton under the suitable environment for its growth.” 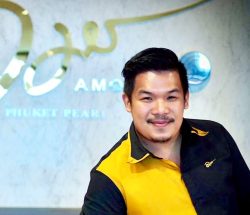 Touted as Phuket’s oldest, the farm has been welcoming tourists since about seven years ago. “We want to create the new experience for our customers,” said Sarran Somrak, managing director and public relations director. “The pearl farm [tour] contributes to the quality and authenticity in our pearls products.”

The tour may be booked directly through the company website or through various tour operators.

Hatchery International booked the tour for two on one January afternoon and it turns out to be an exclusive tour, if only because no other people had booked. Opening of Thailand to international tourism is just easing up. Normal tourist numbers and activities – in both international and local tourists – have yet to bounce back.

In ordinary times, there would be visitors from Thailand and all over the world. “There is no specification on the nationalities as we got visitors from all around the world including Asia, Europe, America, Africa, Oceania, local Thai people and university students with curiosity on how the pearl farm, with its long history, can cultivate pearl in this tiny island,” Intorncharoen says.
The technician proceeds to provide a detailed overview of what goes on and how things are done on the farm. It is almost like attending a seminar but in a very relaxed setting. Creating an appreciation for pearl culture is an advocacy.

“We started the tour to have more people to know and understand the nature of pearls since there is only a small number of people who know about pearls,” Somrak says.

Posters of scientific studies done in collaboration with the academe are plastered on the wall behind the technician. Phuket Pearl was able to grow because of its belief in science. Beyond studies that established the parameters for growth, nutrition and survival are those that focus on production. Some of these refer to kinds of nucleus ideal for seeding and how depths affect the diameter of pearls.

These are but a sampler of technologies that have been pushing the company forward.

In 1985, they had to collect oysters from outside of Phuket because of scarce availability. They were likewise hit by steadily increase in mortality of oysters.

Five years later, a member of the third generation, Amorn Intorncharoen, stepped in. From solely pearl production, he initiated jewelry production using their loose pearls and developed a complete factory system. And he collaborated with a university on research projects.

One of the high points in research and experiments resulted with spherical or round pearls in 1992. In 2003, they patented the Rather Round Pearl technology. They became ISO-certified in 2004.

From day one of culture, it takes three years to harvest a South Sea pearl technician controls size and shape. There is one nucleus for one shell. One maxima has two cycles of one pearl each. In South Sea Pearls, only 30 per cent form the perfect round shape. After second harvest, shell is brought back to sea, where it produces larvae.

“We have a separate area for the oysters to safely breed without the natural enemy. After that, we will set some of the larvae free under the sea to maintain the sustainability of the ecology,” Intorncharoen explains.

From seeding, it takes fucate one year and six months to produce an Akoya. Fucate has only one cycle of one pearl harvest. Fifty per cent achieves the perfect shape.

Mabe, characterized by its half-spherical shape, takes a year to produce. Eighty percent forms into the perfect shape.
Real production of pearls begins with seeding. Nucleus is implanted into the flesh of the maxima and fucate oyster. With penquin, the nucleus is glued to the shell.

The ideal culture depth for maxima and fucate is five meters-deep. For penquin, it is two-metres deep. These are regularly maintained by scraping off barnacles. If these are not removed, there is the possibility that the entire oyster would be colonized, blocking the lips and, consequently, seriously impeding absorption of nutrients.

Intorncharoen said that selection for oyster broodstock is done by farm professionals when the cohorts reach one year. Diets, produced and prepared on site, are mainly composed of planktons.

The farm produces up to 100,000 oysters annually. Over 50,000 pieces of pearl jewelries are produced.

There are more to see in the cages other than oysters. Like red corals grown in some of the cages. These are natural indicators of the quality of water. Red corals don’t thrive on less-than-ideal water conditions.

Some cages are also stocked with food fish such as groupers. The pearl farm buys live fish selected from usual catch of the fishermen in the area. The same fish are grown in the pearl farm for food and conservation.

Their corporate social responsibility extends to industry folks out of water. “Our farm also operates to support the education program for many students who learn about marine science,” Somrak says.

When visitors leave the farm, they get on a boat back to the wharf and are driven to the showroom about 15 minutes away. Phuket Pearl takes pride in saying that they are Phuket Island’s only pearl shop to have their own pearl farm.

Back in terra firma, the visitors get to have a very visual understanding of Phuket Pearl’s five-factor quality control chart: luster, surface, shape, color and size matching. There is an exhibition area, which gives another detailed overview of pearl production and technology, but this time in style.

The other section leads to the sales floor area. While one checks out the merchandises on the showcases, which cost anything from baht500 to baht1,000,000 (US$15 to $30,500), they also get to see intricately designed beauty pageant crowns on display.
Some of the visitors buy. Some don’t. Whichever the case may be, there is one thing for sure. All leave knowing why South Sea pearls could be so expensive while Mabe is more affordable. And with a wealth of knowledge on production and a deeper appreciation of the product.