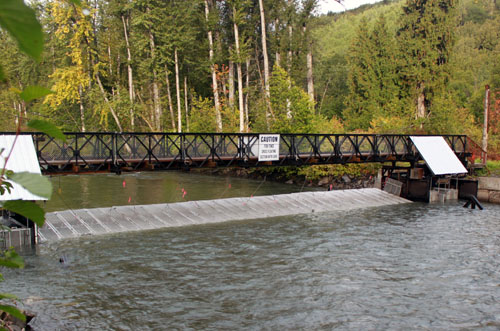 Kitwanga River salmon are the focus of a new study that may revolutionize how seasonal runs are counted, and expand understanding of populations in streams too remote to include in today’s surveys.

The study is a collaboration between Simon Fraser University and the Gitanyow Fisheries Authority with the goal of determining if salmonid environmental DNA (eDNA) found in river-water samples can establish the number of spawning fish as accurately as manual counts.

“I think we’ll be successful. We’re looking at five different species and I think we’ve got a really good chance at this,” said lead researcher, SFU biology professor Vicki Marlatt.

Environmental DNA refers to traces of DNA animals shed into their surroundings – a pink salmon, for example, will release billions of cells per day in its feces and dislodged scales. For this study, researchers will collect one-litre samples of river water on a daily basis then count the DNA occurrences of the targeted species. With the help of a statistician, what’s found in that sample can be extrapolated to account for the entire stream.

“There’s a fair bit of math behind it,” Marlatt said.

The challenges are to figure out exactly how many cells each salmon species sheds in one day, to avoid counting an individual fish more than once, and then calibrating the process to account for ever-changing river conditions. But if the math is right, the count will be equal to the conventional manual method, where salmon are tallied one by one as they pass through fences and gates spanning the river.

The benefit of eDNA sampling means a low-cost, non-invasive method of counting that doesn’t require constant human presence. It can also be expanded for wider commercial use across fisheries and aquaculture sectors.

“If we’re successful, this would allow us to collect more data on the number of salmon in hundreds of rivers that are not being counted in Canada,” Marlatt said. “Also, if this proves to be more effective and efficient, in terms of human time and cost, then certainly this is something we could consider replacing some of the fish fences with.”

But eDNA sampling would only augment, not replace, the fence counts on the Kitwanga River.

Gitanyow Fisheries head biologist and senior technical advisor, Mark Cleaveland, explained the fence off the mid-point of the Skeena River is the only one among few in the Northwest that counts all five species of salmon. It’s a state-of-the-art device with a high-definition camera to assist with manual counts that also enables staff to isolate about five per cent of the passing fish for important physical inspections for weight, sex and overall health.

“This is a unique facility, but it’s really labour intensive and expensive so you can’t have them everywhere,” Cleaveland said.

“With this eDNA technology, 10 years down the road we might have it dialed in so we can go take water samples in different watersheds – if you take it at key times, you could do more surveys in more areas and it would result in better management.”

Accurate counts are critical for Fisheries and Oceans Canada to determine allowable harvests each year in the commercial, recreational and First Nations fisheries. The department will sometimes rely on fence counts when river conditions disrupt efforts at the Tyee Test Fishery in the lower Skeena.

“It’s important to reach that balance where we’re escaping enough fish to the various places so we don’t over-exploit them to the point they don’t come back. These programs give us the spot check we need.”

The eDNA study was scheduled for completion this year but high rains forced its postponement to 2021.

Marlatt is confident of the experiment’s success next year, citing one of very few related studies recently completed in Alaska.

“It really is a lot of work, and it was going so well,” Marlatt said. “We managed to get this up and running despite a pandemic and despite getting all the funds laid down and the team together, then the heavy rains came and the fence had to be opened otherwise the 1/8river 3/8 would have taken it down. But we’re ready to go next year and I’m pretty optimistic, based on the study in Alaska. With some tight manual counts and tight water-flow data, I think we’ll make some big strides.”

The study is funded through Genome BC’s Sector Innovation Program.