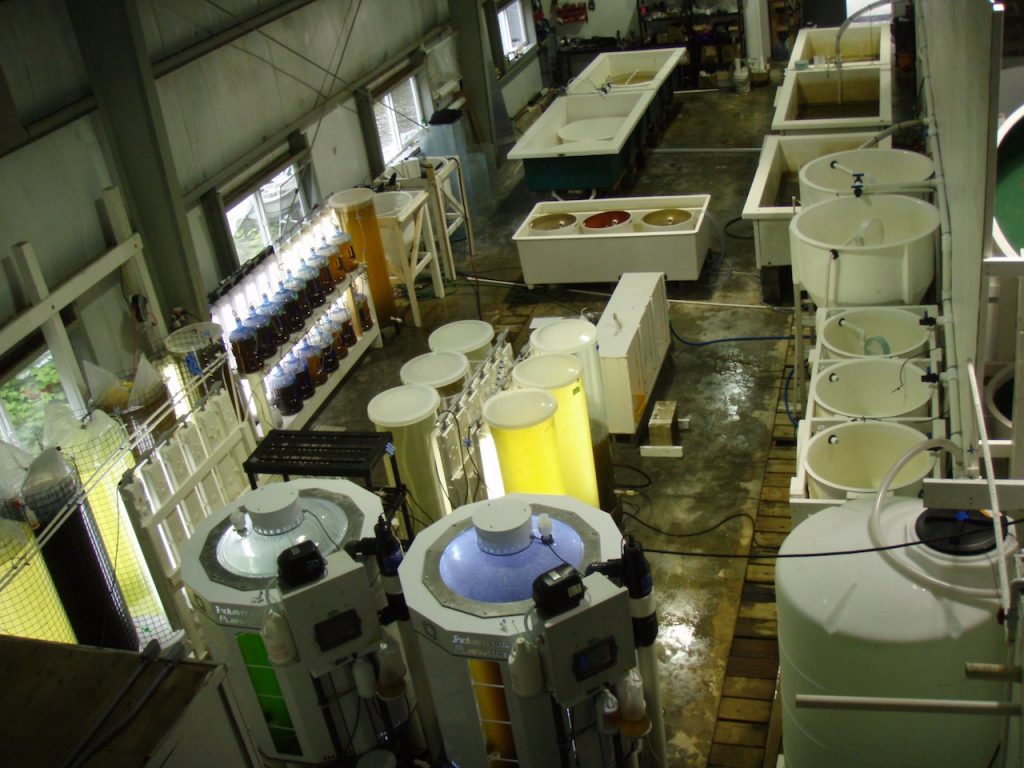 In October 2012, Nova Harvest Ltd of Bamfield, BC was awarded a $69,800 grant from Canada’s Department of Fisheries and Oceans to benchmark and demonstrate innovative land and ocean-based nursery technologies for better geoduck seed production.

Things have gone well and today the company is planning to increase its production to meet an anticipated growth in demand from geoduck farmers in the province.

Nova Harvest president JP Hastey works in the hatchery with an algae grower, and a fulltime hatchery technician. The building is leased from the Bamfield Marine Science Centre. The facility has greenhouse space and the main hatchery unit which is housed in a single-storey steel-clad building.

One of the company’s challenges is the restricted algae-production space. The hatchery takes water from the ocean and cultures it to grow algae for the geoducks. Hastey said they would like to increase seed production to “upwards of six million with a shell length of 5mms,” but that is going to require increased algae production to feed the “seed” clams.

About 50-100 geoduck broodstock are taken from the ocean a season, in December and January. They are held indoors in darkened facilities in water at about 12°C, for about five weeks, “until it’s time to spawn.”

Spawning is induced by feeding the clams increased quantities of algae, all of which have to be grown on the premises. The increased food availability and higher water temperature (15°C) prompt the geoducks to reproduce.

“We keep the clams in 1,500-litre tanks that are a metre deep. The larval tanks are 300-600 litres, with a cone bottom,” said Hastey. “We use flow-through culture for the (clam) larvae for 18-20 days and then they’re set on grids or screens in the bottom of down-welling bins.”

“They’ll set in just a few days. Right now we’re keeping them on the screens for the first couple of weeks; and then stocking them out to sand raceways that are 2.5m long, 1.2m wide and just under a metre deep, with 2.5cm of sand in the bottom.”

The tiny clams bury themselves in the sand as they would in the ocean substrate, but as they grow, start to show on the surface.

He keeps a very close eye on the pH level of the ocean water going through the system wary of ocean acidification, which has been a problem for larval production in other shellfish facilities along North America’s west coast.

Because Nova Harvest’s larval production is now relatively small, the operation uses comparatively small amounts of ocean water so an effective pH level is achieved by adding soda ash to the larvae’s water.

The algae bioreactors are made by Industrial Plankton Inc, of Victoria, BC. “Right now we’re producing about 9,000 litres of coarse algae (from ocean water) a day,” Hastey said. “For more refined algae it’s about 2,000 litres a day, and the reactors produce well.”