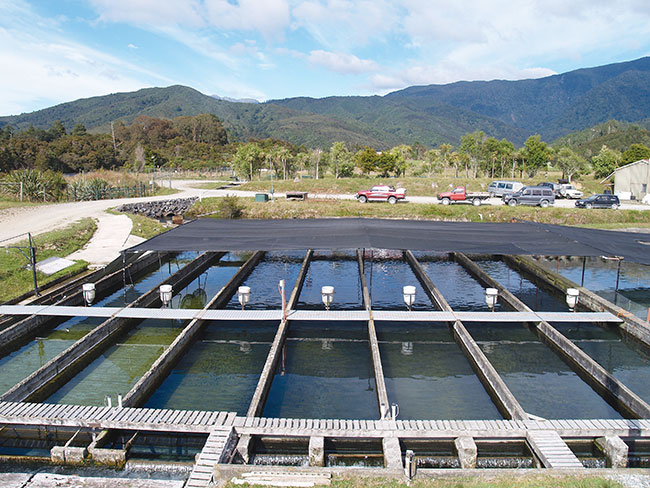 There is now no doubt whatsoever that climate change is driving extreme weather events around the planet. While it is still argued whether the cause is anthropogenic or a natural cycle, there is no denying the impact is real and economically devastating. Australia’s position, wedged between the Indian Ocean Dipole (IOD) and the El Niño-Southern Oscillation (ENSO), leaves it particularly vulnerable to the mood swings of these two thermodynamic forces.

When the IOD is in negative phase, it brings wetter than normal seasons to Australia, and conversely when the surface temperature of the western Indian Ocean is warmer, it brings drier times to southern Australia and the tropic north. The ENSO phases are similar. El Niño means drier times for eastern Australia and when the ENSO is in its La Niña phase, it brings wetter than normal rainfall. When the two wetter phases line up, vast floods can occur, inundating urban areas and farmlands. The converse brings catastrophic droughts and bushfires across great swarths of the country.

All food producers have had to deal with this and the ever-increasing damage done by the violent storms driven by the excess energy built up in the atmosphere. How has the local aquaculture industry, in particular the hatchery sector, coped with these volatile, high-risk situations?

While a great deal of the grow-out is still carried out in intensive open systems and sea cages, over the last two decades, the hatchery sector has largely moved indoors to climate-controlled systems; secure against the vagaries of the weather. 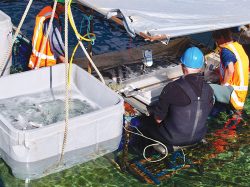 The economic and strategic benefits of this are obvious, and have arguably been the driving force for the investment boom in the Australian industry. Apart from biosecurity and having control over the conditioning of the broodstock, the hatcheries have been able to reliably produce huge volumes of seedstock to a timetable suitable to growers. Growers, who would otherwise be at the mercy of seasonal conditions for their seedstock supply, gained confidence to invest and were able to establish a marketing point of difference over their wild caught competitors.  It is fair to say that climate-controlled, indoor hatcheries have climate-proofed the Australian hatchery sector, and consequently, driven the growth of the aquaculture industry over the last 20 plus years – from a value of AU$747 million (US$503.5 million) at the beginning of the century to a value of over AU$2.2 billion in 2021. Some of this added value can been due to the rising value of seafood generally, but most can be attributed to a reliable source of quality seedstock.

Having control over the breeding cycle has led to the ability to select for key genetic attributes, such as growth rates, conformation, consistency and docility. The threat from climate change varies from sector to sector, however the introduction of genetic science into breeding programs has given hatcheries the capability to deal with rising temperatures and acidification, and it has put them at the forefront of the solution. 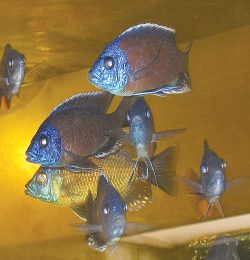 The Tasmanian salmon industry is amongst the most technically sophisticated aquacultures in Australia.  For some time now, smolt have been produced under environmentally controlled conditions and the hatcheries are secure from changing climatic conditions.  However, the location of the sea cages, in the path of the East Australia Current, leaves the industry’s grow-out sea cages somewhat vulnerable. The Institute of Marine and Antarctic Studies (IMAS) has been working with growers since 2015, among other genetic attributes, to increase the temperature tolerance of Atlantic salmon. And the work is ongoing.

Individually, Victorian trout growers still farm under the traditional flow-through, open hatchery method. Ed Meggitt of Goulburn River Trout said that even breeding in the depth of winter, climate change was having no impact on their spawning and fry production.

Land-based Abalone aquaculture relies totally on marine waters pumped ashore. Mark Gervis, chair of the Australian Abalone Growers’ Association, said that while temperature hasn’t been a major issue as yet, there have been different effects at the various abalone farms around the country.

“There’s definitely a rising trend in seawater temperature and this has probably been most noticed on the east coast of Tasmania where the effect of the East Australian Current has become more dominant over recent years,” he explained. “Anyone farming shellfish would be also be concerned about ocean acidification and its potential effects on the prevention of shell formation in larvae or the reduced strength of shells in adults. As land-based growers, we are all also concerned about both the likely increase of storm damage and the rate of sea level rise as many farms operate with a low head above sea level.”

The shellfish hatcheries – mussels, scallops and oysters – were amongst the first to first to shift to on-shore production.  In the case of oysters and scallops, it was a logistic-driven move.  With secure spat supplies, the industry could expand exponentially.  Closing the cycle also had economic benefits.  Broodstock could be conditioned in a bio-secure situation out of season and spawned so that triploid spat were available for stocking the water temperatures on the marine leases were optimal. 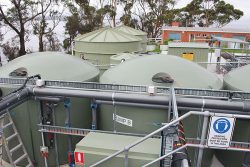 Part of the water treatment plant at the IMAS facility in Tasmania that is part of the salmon industry’s future-proofing genetic program.

Prawns, mainly Penaeus monodon, are grown along the tropic and sub-tropical east coast. While, because of its established climate-controlled spawning practices, the hatchery sector generally sees no immediate negative impact from climate change, however, it is fully aware of the vulnerability of growers in open system from inundation from excessive rainfall events and temperature spikes.

Shellfish Culture Ltd. in Tasmania is one of the country’s largest shellfish hatcheries. Scott Mactier is general manager of breeding and R&D. “It appears we aren’t facing any direct impacts from issues such as ocean acidification. In saying that, breeding low-pH tolerant lines is something we may look to do in the future as a risk mitigation strategy. It may be that we are, however, seeing changes to microalgal assemblages in nearby waterways through increased incidence of harmful algal blooms. This can directly affect hatchery performance if the right filtration systems are not in place.”

Yellowtail kingfish is an emerging species. Western Australia’s Department of Primary Industry R&D has been operating a pilot hatchery at their Fremantle facility since 2012. Aquaculture R&D director, Greg Jenkins, said their marine operations were secure against the impact of climate change for now. However, as an industry supplier, they were aware some of their more northerly based clients, at some time in the future, would have the challenge of tropical water along with some tropical species extending further south. As the DPIRD hatchery is located on the coast at Fremantle, any impact of rising sea levels would be severe. DPIRD also operates the States trout hatchery at Pemberton. Climate change is impacting WA’s southwest with lower rainfall and more severe summers. “Temperature tolerance is something any future selective breeding program would incorporate,” Greg said. 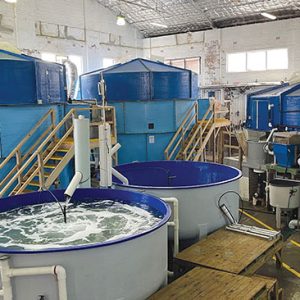 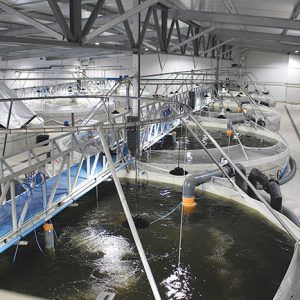 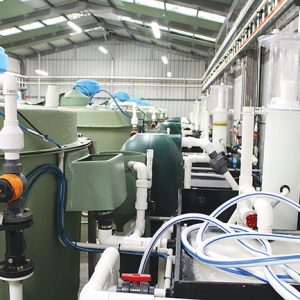 A view of the climate-controlled trials that, among other attributes, is selecting a salmon genotype with temperature-tolerant tendencies. (Photo: John Mosig)

Barramundi are typically bred in environment-controlled systems. MainStream Aquaculture’s founder and chief scientist, Paul Harrison said, “Our hatcheries are climate and biosecure, which provides a reliable supply of barramundi to the growout sector. However, the fish are predominantly supplied to farms that operate in open systems subject to environmental extremes. Fortunately, barramundi naturally grow well over a wide range of conditions and can tolerate rapid change, making them a good future-proof species. Despite this, in an effort to optimise barramundi’s natural tolerance, our breeding program does include targets for environmental tolerance (temperature and salinity), which is seen as an important improvement to mitigate the impacts of climate change.”

Australian native fish have evolved under the island continent’s unpredictable seasonal regime.  While the hatchery sector still relies on open plankton ponds for larval rearing, the development time from larvae to fry is short and at a time of the year before temperature spikes become a problem.  At this stage, only Murray cod appear likely to become a mainstream commercial species, and their larval development lends itself to controlled breeding, and with the new larval and fry diets now available, to environmentally secure rearing.

It would seem that while every hatchery sector is aware of the changing climate, they see the risks in different ways. However, they expressed confidence in their ability to cope and where genetic programs are part of the hatchery operation, their capability to deal with future changes. Climate impact risks are more to their relative, open-system, client bases.