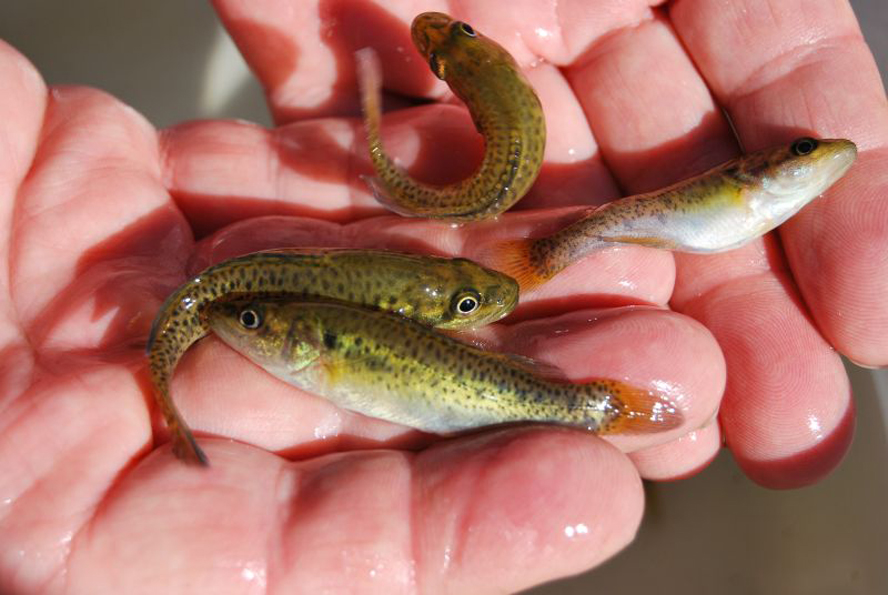 Snobs Creek was originally built as a trout hatchery, but since 1985 has also bred native Australian species. The breeding program has three operational goals:

The first two objectives have been described in earlier issues of Hatchery International. This article deals with native species raised for recreational angling.

Last year, Fisheries Victoria stocked more than two million native fish into lakes and rivers around the state for the fourth consecutive year. Some of these fish were grown at Snobs Creek and others were purchased from private hatcheries in Victoria and New South Wales. The total included more than 1.2 million golden perch (Macquaria ambigua) and a record 107,000 estuary perch (Macquaria colonorum). It also included more than half a million Murray cod (Maccullochella peelii peelii) and significant numbers of silver perch (Bidyanus bidyanus) and eel tailed catfish (Tandanus tandanus).

The stocking program is funded from fishing licence fees and part of the Victorian State Government’s $16 million Recreational Fishing Initiative.

Program Manager at Snobs Creek, Steve Vidler, said they concentrate primarily on spawning Murray cod because it’s much more expensive to buy them from private sources. “We can buy perch and catfish cost effectively for the numbers we require, but Murray cod aren’t cheap and we have a strong track record of growing them here.”

Pond space at Snobs is at a premium during native fish breeding months, and if there’s a slowdown in the season the number of spawnings might be reduced. On the other hand acquisition of a Siemens micro pore filtration unit that filters incoming water down to 0.2µm has enabled them to control incoming parasites and pathogens. In each of the last two seasons they have shipped over 500,000 40-50mm (1g) cod fry.

Other problems they face are ectoparasites and filamentous algae. Water for the ponds is drawn untreated straight from the creek and carries warm-water parasites such as whitespot, Chilodonella and Trichodina. Spirogyra is especially troublesome. “We have 10 plankton ponds,” Steve said. “Some years we’d have four or five ponds, if we left them, out of action because of filamentous algae.”

Ponds are used twice a season. Once the first runs of fingerlings, (usually trout cod & Macquarie perch) are harvested, the pond bottoms are dried out a bit, then limed and fertilized for the next plankton bloom. Filamentous algae can play havoc with the schedule. They have tried using a dye to reduce light penetration, and more recently Coptrol, an environmentally friendly copper sulphate-based product, which works well. “Apart from that,” said Steve “there’s the usual bird problem, which is just a matter of constant surveillance.”

When they do have trouble with ectoparasites the ponds are treated with formalin or, if the outbreak is close to harvest time, the fry are treated with salt in the hatchery tanks. They are given 24 hours to settle down then dosed in a couple of salt baths at 10ppt for an hour.

To quantify the success of the restocking program more than half of the fingerlings are marked with a Calcein dye that colours the skeleton, but due to the high salinity of the treatment, not all species can be treated this way: Golden perch undergo a 50ppt Calcein and salt bath for five minutes before they’re re-hydrated. The cod can only tolerate 25ppt.

This gives the Department an idea of the contribution that stocked fish make to a population. The results aren’t fully analysed, but early indications are that over 90% of the fish taken by anglers are stocked. Similar research by NSW Fisheries shows that in impoundments nearly 100% of golden perch taken by anglers were bred at the Department’s Narrandera hatchery; in the rivers, it was between 20 and 30%.

Anglers apply to have their preferred waters stocked and the Department assesses the stocking rate by a set of criteria that takes into account such items as the suitability of the site, predation pressure and angler access.

Murray cod breeding protocols are similar to those employed for trout cod. The adhesive eggs are collected from nesting boxes and incubated in the hatchery. The larvae are held in the hatchery for 8-10 days while they use up their yolk sacs and the jaws develop. They’re then stocked into plankton ponds, but if circumstances dictate, they can be fed Artemia until a pond comes available.

The most challenging species bred at Snobs Creek is golden perch (Macquaria ambigua). This migratory fish is found throughout the Murray Darling Basin, and is known by several names – callop, yellowbelly and Murray perch. Until the fishery was recently closed, it was the mainstay of the inland commercial catch.

Steve has had years of experience with the species at other sites and admitted they had him baffled: “Everything seems right; the vents are swollen, the eggs are ripe, ovulation takes place on time after inducement, they spawn on time,” he said, “but after that the wheels fall off. The eggs are fertilized but collapse during incubation. We’ve mixed the broodstock around, brought in fresh stock from the wild and other farms; nothing seems to help. The answer could simply be that the very low winter temperatures [at Snobs Creek] obstruct the pre-spawning and conditioning of golden perch.”

Fortunately, the more northern commercial hatcheries are able to produce large numbers of this extremely fecund species. With egg production of 500,000 per kilo of female body weight, they only need a few successful spawnings to supply the market.

Unlike Murray cod and silver perch, there is limited demand from other growers for golden perch as it is not a proven farming species. While they have a strong consumer following, weaning onto dry feed, and uneven growth, have been the major problems. Moreover, because the females grow faster than the males they tend to dominate the bio-space in an aquacultural situation.

Silver perch are also part of the re-stocking program, but climatic restrictions and the limited pond space, coupled with the ready availability of low priced fry from commercial hatcheries makes it more practical to buy fry to meet stocking demand.

Estuary perch, as the name implies, are found in coastal rivers that drain to the sea. They resemble golden perch in many ways including the spawning methodology. The condition of the eggs and the motility of the milt are checked when the water temperature approaches 22ºC. When ready, the females are injected with 1,000iu of Chorulin and the males with 500iu. Spawning takes place 28-32 hours later. Incubation takes another 32-37 hours. Within three days the yolk sac is exhausted and the larval jaws are active. They are then stocked in plankton ponds that have been fertilized and flooded at the time the brood fish were injected. Eight to ten weeks later the fry are 40-45mm and ready for stocking.

A small number of eel-tailed catfish are produced, again by way of hormone induction. These fish have very low fecundity compared to most of the other Australian native fish bred at Snobs Creek (500-3,500 eggs per female). Future projects concentrating on catfish production should see this popular species produced in greater numbers. The catfish program is new, and new breeding protocols are being developed as well as a genetic map of the species across its range. Found in the calmer reaches of the Murray Darling basin and the streams of the warm temperate and sub-tropical eastern seaboard, the fish has a strong following amongst anglers for its wiliness and culinary qualities.

Over the years Snobs Creek has become a major source of stock for Victorian anglers and has developed a reputation for reliability and quality. As surveys have shown, the output from the hatchery is integral to the bounty of the recreational catch.

O02.jpg       Incubation room where eggs are incubated and larvae hatched.

002r.jpg     Newly hatched fry are collected and taken to the larval rearing trays on the left. On the right are holding and feeding tanks used if the plankton ponds are already occupied.

074.jpg       The 0.2µm ceramic filter eliminates most pathogens and parasites