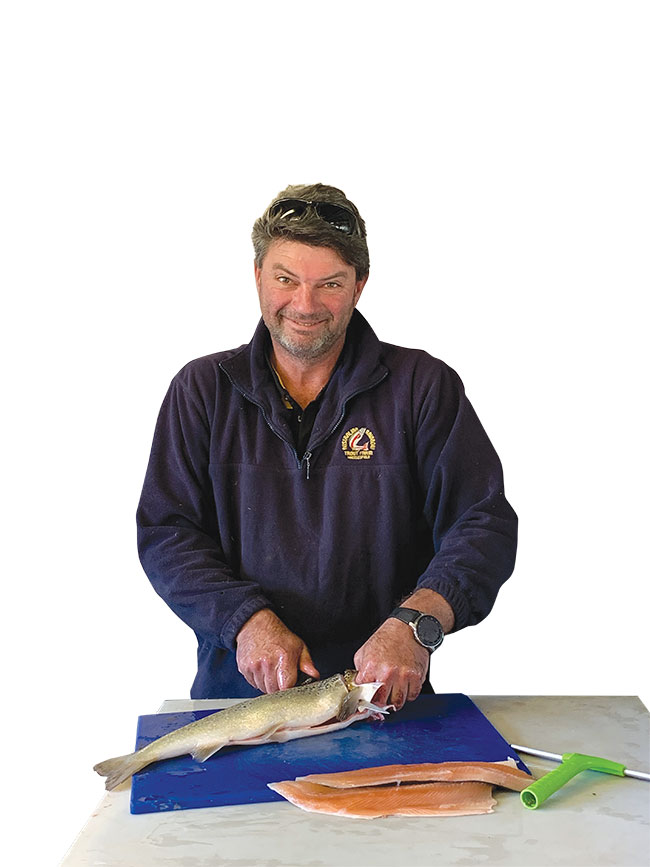 The Australian Rainbow Trout Farm (ARTF) is a family farm and one that has found a way to survive in the challenging times faced by small producers, even before the COVID-19 pandemic. Like most trout farms in Victoria, it operates under an aquaculture license that go back to the 1950s. The economic theory then was to utilize stream flows to provide alternative income for agricultural farmers. For their viability they relied heavily on the farmer managing all aspects of the operation: seedstock production, growout and marketing. To say times have moved on would be an understatement. Improvement in available feeds is just one area of efficiency, others of course have been the rationalization of the industry.

Not all change has been for the better. Over the last 20 years, the hostile change in the climate has accelerated and summer stream flows and temperatures, caused by drought, heatwaves and bushfires, have driven many stream-diversion farms out of business, particularly the smaller ones.

The Malseeds – who own ARTF – have been fortunate. Located on the upper reaches of the Woori Yallock Creek on the cooler southern side of the Great Dividing Range, they’ve survived by diversifying their market and widening their product range.

The farm’s proximity to Melbourne’s five million people – only an hour’s drive from the centre of the city – has provided them with an eager client base of people wanting to catch their own fish and have a day out in the bush. The “day out in the bush” experience has been enhanced with the addition of a small sanctuary with emus and kangaroos, and livestock and poultry wandering around the place.

For purists, the three large settlement ponds have been set aside for fly fishermen and are stocked with trophy fish. But the real hook comes from the range of species. Atlantic salmon (Salmo salar), brown trout (Salmo trutta), rainbow trout (Oncorhynchus mykiss), “golden trout” and brook trout (Salvelinus fontinalis) can all be caught in sizes ranging from plate size 800-gram to a 3-kilogram banquet fish. However, it’s the brook and golden trout that have caught the imagination of the day-trippers.

Brook trout – they’re actually a char – are great eaters and put up a decent fight on light tackle. The golden trout, a colour variant of the rainbow trout brought in from an alpine farm that is no longer operational, has been popular for its difference. 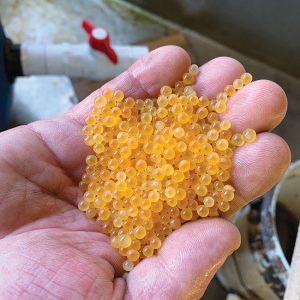 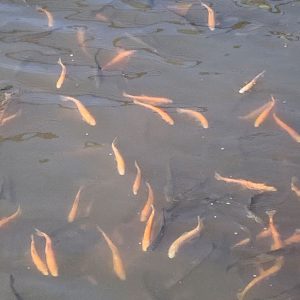 Golden trout are quite popular for their uniqueness. 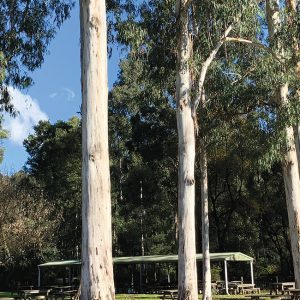 The barbecue area is a popular feature at the farm, but has since been closed off due to the pandemic.

All fish are bred on the property in a three- to four-week window once the water temperatures have dropped to 10-11ºC which, starting with the brook trout, is usually mid to late May. Incubation takes between 300 and 400 degree days.

Steve Malseed, worked on the farm during his school holidays and weekends. After finishing his agricultural science degree, he took over the operation of the farm.

“Despite the horrendous bushfires across the whole country, last summer turned out to be one of our mildest,” he says. “Once the rains came in January, stream flows picked up and temperatures stayed mild. The previous January (2019) we had water temps of 26.8ºC. We have never seen these sorts of readings in the 32 years we’ve been here. We exchanged as much water as we could from the reduced stream flows, stopped feeding and used paddlewheels and mushroom head aerators to keep the dissolved oxygen levels as high as we could. It was a costly time for us, I can tell you.

“On an industry basis, we talk between farms and select for the more temperature tolerant fish for broodstock, but apart from that there’s little you can do, really.”

Summer temperatures have a huge bearing on growth rates. During the winter months they lose a bit of growth after a frosty spell when water temperatures can get down to 5ºC, but they’re usually in the 8-10ºC range. Even with reduced feeding rates when the thermometer climbs, the trout take 18 months to reach a marketable 400 to 450 grams while the salmon will be around 500 grams plus in the same time.

“The salmon shoot away after that. Tourism makes up 90 percent of our business and the other 10 percent is split between aquaponic growers and farm dam stocking. In both markets it’s the variety that is the main attraction,” Malseed says.“During the spawning season the salmonids put a lot of energy into their egg production and tend to lose colour but some customers like to fish them then for the roe.”

What roe doesn’t get off the farm with the anglers the farm sells to commercial processors.

“We feed Skretting salmonid diet range to all species. The Brookies could probably benefit from lower energy diet but as it’s the marbling the customers are looking for it helps maintain that aspect,” he says.

While there’s no commercial interest in the outcome, male brook trout milt will fertilize female rainbow and brown trout ova. The offspring are sterile and not as robust as the parent stock but there is interest in them as trophy fish. The progeny of the former are called “cheetahs” and those of the latter are called “tigers.”

As if climate change wasn’t enough, the coronavirus has hit the farm severely. “The lockdown restrictions from mid-March included travel and fishing. It’s one of our busiest times,” laments Malseed. “It’s a beautiful time to be in The Hills and on a good day we can have as many as 700 people barbecuing their catch and enjoying the rest of the parklands. And just when we’re easing restrictions here in Victoria, people dropped their guard and we’ve had to retighten the lockdown. It’s hard to know how and when it’s all going to end. At least it started raining again.”