A partnership between Montana State University (MSU) and the US Fish and Wildlife Service has allowed the Ennis National Fish Hatchery in Ennis, Montana, to meet state standards for water treatment with the use of a vertical flow artificial wetland. Project leader Dr. Connie Keeler, says the artificial wetland is an attractive alternative to traditional mechanical removal systems. 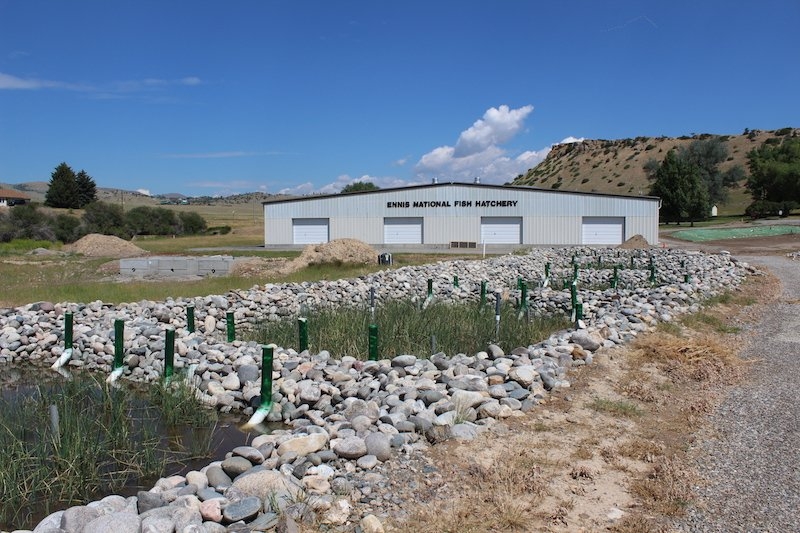 “I believe that when it’s completely functional, we will be able to meet those water quality standards for the next 15-20 years,” says Dr. Keeler.

When examining potential solutions, it was discovered that there was a local expert – MSU’s Dr. Otto Stein, who had been working with experimental wetland systems since the early 2000s. He says that vertical flow systems such as the one at the Ennis Hatchery allow artificial wetlands to perform to the same level you would expect of a more expensive mechanical system, or a horizontal flow wetland.

“The big advantage of doing a vertical flow system is that the system is not perpetually saturated,” says Dr. Stein. “You put a dose of water on it and it trickles vertically and then it becomes unsaturated after that dose comes through. You wait a period of time and put another dose on. Because it’s not saturated, it’s much more aerobic and you get much faster reaction rates for all the microbial actions that break up the contaminants in there.”

MSU PhD candidate Chris Allen worked with Stein to design and implement the wetland, including a pilot study conducted to ensure continued operation in cold weather. He compares the vertical wetland to a coffee filter, collecting the solids on the surface, as opposed to settling in the bottom as in horizontal wetlands.

“We reduce the amount of oxygen that the microbes need for subsequent treatments, which allows us to get superior treatment without a large footprint,” says Allen.