The live feed still has the significant edge, but MD development is improving. 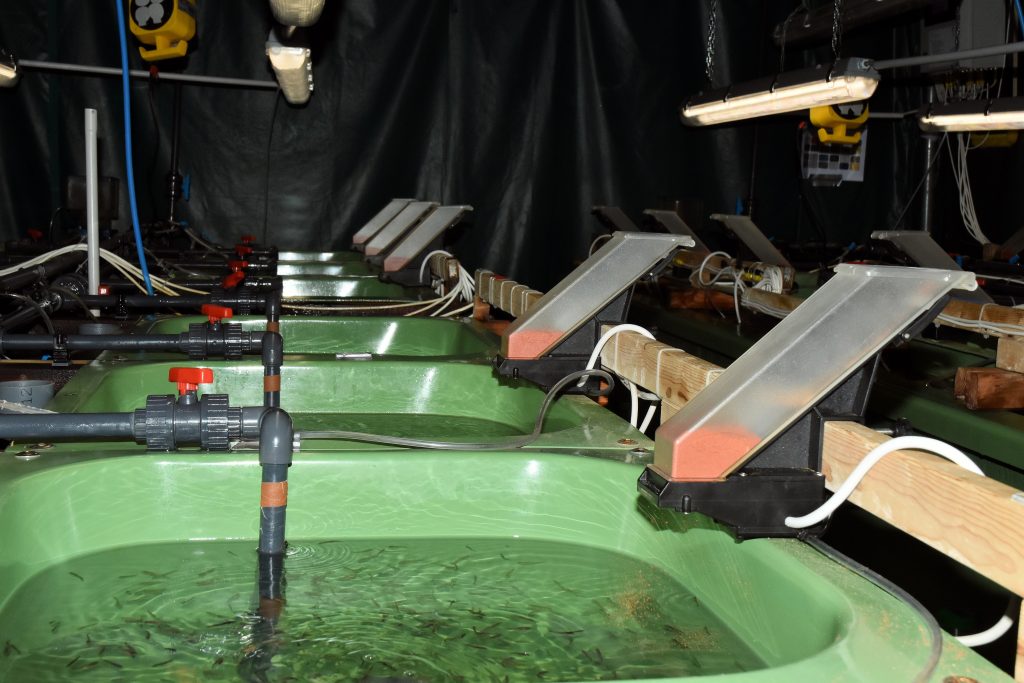 A study in Germany has demonstrated that live feed still trumps microparticulate diets (MDs) in early weaning in European sea bass (Dicentrarchus labrax) larvae. But it also showed that MD development has been improving.

Jan Giebichenstein et al., in an article in Aquaculture Research, compared the performance of four state-of-the-art commercially available MDs used in an early weaning protocol, to the standard Artemia-based feeding. The study primarily sought to significantly reduce the live feed period without compromising lower survival or deformities. It was conducted at the Gesellschaft für Marine Aquakultur (GMA) in Büsum, Germany.

Since it is very labour-intensive, production of live feed, including algae, in hatcheries represent up to 70 per cent of costs. Early weaning on MDs could reduce costs in both feeds and labour, significantly.

Larvae were kept in darkness for the initial seven days. From eight to 20 days post-hatching (dph), Artemia nauplii were fed to all treatments. To increase turbidity, microalgae were added from eight to 16 dph. Co-feeding with MDs began in the micro-diet treatments at 16 dph. From 20 dph, four MD treatments were exclusively fed with dry feed and the control group was fed with enriched Artemia until the termination of the experiment at 50 dph.

Performance
The control group had the lowest abundance of deformities, most continuous growth, and result in best larval quality. Per the study protocols, MDs used “cannot be recommended for industrial use,” it was cited, because of lower survival, reduced growth and increase in deformities of the larvae. One MD, however, was not totally counted out. It achieved the lowest amount of deformities and also the best and most uniform growth pattern among the four MD treatments.

This showed that “MD development has been improving and might, in the very close future, be able to replace the live prey phase at least partly. Important to note is that most deformities found in the MD4 group did not affect the larval shape and thereby, have a minor or no impact on the larval fitness,” the authors said. “We assume that minor deformities can improve over time, given optimal rearing conditions and feed nutrition in later rearing stages.”

There are several factors to consider in improving MDs so these may provide optimal impact in larva. “MDs can be considered as a high-tech product and do not have much in common with pelleted fish feed,” Giebichenstein told Hatchery International.

“According to the manufacturer’s declaration, all used diets are quite similar concerning macronutrients. Thus, micronutrients like vitamins, trace elements, or antioxidants can significantly improve the product. Production processes can also play a major role with regard to distribution of all materials in every particle of the feed. For instance, if the feed is made from crumbles or are the MDs produced encapsulated.”

Stressing the importance of technical quality of MD, he explained that leaching of water-soluble substances, such as hydrolyzed proteins and vitamins, deteriorate the quality of an MD very quickly when administrated into the tanks.

Buoyancy must also be considered. It is better if the particle remains for a while in the water columns. If it sinks quickly to the bottom, larvae do not accept it further as feed.

“Encapsulated MDs, e.g. encapsulated with alginates, may have an advantage here. Nevertheless, they should allow some leaching to release some amino acids, which function as attractant to the fish larvae. The movement pattern of live feed is missing with MDs, thus there must be another trigger to raise the attention of the fish larvae,” said Giebichenstein.

Co-feeding
The study’s general goal was to wean much earlier compared to present routines. Weaning larvae from live feeds depends on MD quality, water temperature, and species. “In the close future, we will certainly see significant improvements concerning the point in time when MDs are introduced in the feeding protocol of marine larvae. And this is a necessary process, since Artemia cysts are quite variable in quality and are a limited resource; if we want to produce more marine fish for the table, we need to find a replacement of Artemia nauplii in marine larval feeding.” And not to forget the costs and effort for enrichment of the nauplii.

In the applied experiment, weaning sea bass larvae on MD at around day 30 could have reduced mortality but would have also required a longer co-feeding period. Consequentially, this could have increased the performance in all treatments. But this was not in the focus of these experiments.

Selection among the current commercially available MDs are primarily driven by diet quality and price. Depending on egg and larval supply, effect on survival may be just secondary. This may be the case in commercial species like sea bream and sea bass, Giebichenstein said, where the occurrence of deformities and the manual sorting is an expensive and labour-intensive process that can strongly add to the production cost of a hatchery.

If there is one thing that is not being considered often enough, it is feeding technology. (See sidebar.) “Application of live feed is quite different from applying MDs,” he said. Live feed is provided three or four times daily. Feeding schedules using MDs is exponentially much more. “MDs must be provided much more frequent, up to 10 times an hour, but in rather small doses in order to always offer some feed particles in the water column. Most hatcheries do not yet have the technology to feed MDs properly for early larval stages, which often ends up in a failure concerning the expectations coming in trials with MDs.

With this, he said that proper feeding technology is very integral to early weaning. Since MDs, and artificial feed in general produce more debris in the tanks, new and innovative technologies are needed for the daily cleaning of tank walls and bottoms. He said, “With the more frequent introduction of MDs at earlier stages we will certainly see innovations in automatic tank cleaning systems.”