The Sterling Springs Fish Hatchery (SSH) in Sedona, Arizona, U.S.A., is currently undergoing a US$3.3-million dollar rehabilitation to modernize its facilities. Construction commenced in early December 2018 and expected to be completed by June 2019. 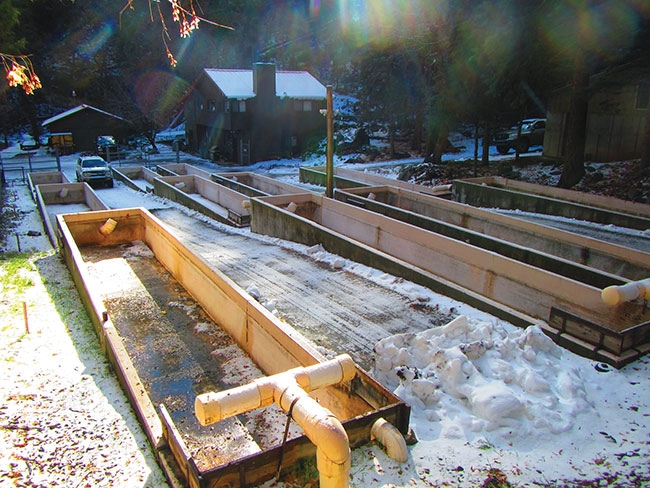 SSH is the smallest facility owned and operated by the Arizona Game and Fish Department hatchery program. This hatchery has a very important role in the hatchery program. Each year SSH produces and supplies hundreds of thousands of trout fingerlings to Page Springs Hatchery – the largest trout hatchery in Arizona – to be raised to catchable size prior to being stocked.

This renovation project was identified in the State of Arizona Fish Hatchery Report. The hatchery management is grateful that the commissioners, the Governor’s office and the Arizona Game and Fish Department executive staff recognize the importance of the fish hatcheries for the state of Arizona.

It is all about ensuring that successful hatchery operations at Sterling Springs continue for years to come. Hatcheries play a vital role in maintaining the quality of sport fishing in Arizona. Planning for the future is necessary to maintain and increase current production in order to meet current and future demands of sport fish in the state. According to the Economic Impact of Fishing in Arizona, annual recreational sport fishing produces US$1.47 billion in economic benefits for the state of Arizona.

The pipe delivery is full of holes from corrosion. The raceways are falling apart. With decreasing water supplies, it is going to become necessary to be able to operate the hatchery with less water.

We are hoping that with a more secured water source and cleared inflow pipes coming from the springs, we may possibly have an increase in water flow which would help with production. The current pipes are a steel welded eight-inch and six-inch boiler pipe that is approximately more than 70 years old. It is rusted out in spots and definitely leaking, allowing foreign materials into the incoming water flows.

The nearly US$3.3 million project will involve the rehabilitation of the water inflow pipes leading to the hatchery, as well as various spring/control boxes along the pipelines. In addition, the outside concrete raceways and water pipelines will be replaced. The project includes a cover canopy and fence around raceways, a new storage building and a partial recirculation system among other improvements.

This pipe will be lined with a cured-in-place pipe liner to keep from disturbing the wilderness setting in which the pipes are laid.

Because of low water flow of approximately 240 gallons/minute, we will not be able to use  circular tanks.  We also evaluated the use of dual drain circular tanks, but with the limitation of water and the small area of the facility, it was not feasible to use circular tanks without incurring an astronomical cost in recirculation equipment and operations.

The hatchery will continue to use 11 rectangular concrete raceways, which will hold 6,358 cubic feet each.

Planning for the future, the SSH renovation will include the installation of a partial recirculation system that will help the facility during the heavy production months. The recirculation system will consist of a sump at the bottom of the facility near the outflow, where the hatchery effluent water will run through a  drum filter and UV light. The water will then be pumped back to the  top of the facility to an aeration tower to later to be diverted to the raceways that need the extra flow for cleaning or production.

Future plans
Once the project is completed, SSH hopes to be able to continue with a stable, healthy production that the hatchery has already been noted for, which is approximately 700,000 to 900,000 fingerlings per year. On average 850,000 rainbow trout and approximately 70,000 browns are raised at SSH per year.

Rainbow trout eggs will continue to be sourced from the Ennis National Fish Hatchery in Montana and Troutlodge in Washinton state.

The sport fisherman in the local area will likely notice the impact of the rehabilitation project. The SSH has made arrangements with its other facilities to temporarily cover Sterling Springs Hatchery production.

Geoffrey Rabinovich is the statewide hatchery program manager for the Arizona Game and Fish Department, in Arizona, U.S.A.