A multi-stakeholder initiative that began five years ago has reached an important milestone in the efforts to bring back Arctic grayling (Thymallus arcticus) to Michigan waters, after the species’ disapperance caused by habitat destruction, unregulated fishing and competition from non-native species.

With the help of two hatcheries, Michigan Arctic Grayling Initiative recently transferred Arctic grayling broodstock from the Oden State Fish Hatchery near Petoskey, Mich., to the Marquette State Fish Hatchery. There, the fish will be reared in water that mimics their natural habitat in order to trigger spawning.

This is a crucial achievement of the initiative, which was created in August 2016. Multiple reintroductions of the species over the past century had been unsuccessful. More than 40 partners to date are involved with the initiative. The Michigan Department of Natural Resources (DNR) Fisheries Division and the Little River Band of Ottawa Indians are considered the two foundational partners. Other partners include the Little Traverse Bay Band of Odawa Indians, the Grand Traverse Band of Ottawa and Chippewa Indians, and Michigan State University (MSU). The Faculty from Michigan Technological University in Houghton was very actively involved in the first few years. Grants and gifts from several foundations, organizations and individuals financially support the initiative.

Eggs to broodstock
In the beginning, Arctic grayling eggs were collected from feral broodstock in the Chena River, a tributary to the Yukon River, by staff from the Alaska Department of Fish and Game and Michigan DNR. Having been shipped to Michigan, the eggs were observed for embryo activity and transferred to incubators where they hatched soon after arriving. The Oden State Fish Hatchery was then ready to receive them with the installation of an ultraviolet disinfection filter on the outflow of its isolation building, essentially making it a quarantine facility.

“At Oden, the fish are reared in well water in the quarantine facility,” said Ed Eisch, Fish Production Program Manager at Michigan DNR–Fisheries. “The facility is physically removed from the rest of the hatchery with its own water supply and facility discharge. Staff have gear and tools that are dedicated for use only in the isolation building, and there are two sets of foot baths that must be used on the way in and out. The rearing water is UV disinfected prior to leaving the facility and before entering the receiving water.”

The fish were subject to three health inspections that occurred at least six months apart, before they could be considered free of diseases and ready to be transferred to Marquette Hatchery as yearlings.

A net of Arctic grayling being loaded into the truck that will take them up to Marquette State Fish Hatchery. photo: dan sampson

Spawning and beyond
The move to Marquette is significant because the hatchery holds its broodstock in raceways that are fed with surface water. While there are drawbacks, such as sediment load and potential pathogens, it is also subject to temperature fluctuations but this is advantageous, says Eisch.

“Similar restocking initiatives have occurred in Montana and these suggest that Arctic grayling brood need to experience both changes in day length and water temperature to initiate spawning behavior and ripeness in the brood population,” he said. “Without both, the fish tend to slowly enter into a prolonged spawning period where individuals don’t necessarily ripen at the same time. We’re hoping that the females will reach sexual maturity at age four. That is the Montana experience but they mature at six or seven in Alaska. We hope that is due to the shorter growing season and longer winters there.”

The gametes will be hand stripped and placed in a high quality incubation environment which will meet all their biological needs and enable them to adapt. Eyed eggs will then be placed into an in-stream incubator to finish their last week or so of incubation. They will then hatch out and emerge from the incubators, essentially mimicking the emergence of naturally spawned fish.

“The timing will be consistent with the timing of ripeness of the adults,” said Eisch. “Arctic grayling are spring spawners and we expect them to spawn sometime in May but sometimes captivity shifts the exact timing of spawning to a minor degree.”

Finding the ideal environment
The river systems that the fish will be stocked in are yet to be determined. Arctic grayling are known to travel significant distances so enabling this is important. Other criteria for the systems to be considered for stocking include an adequate and appropriate habitat for all life stages, appropriate temperature regimes with particular attention to summer temperatures not exceeding a certain level, the presence of suitable spawning habitat and predator populations at levels that won’t impede the chances of success. The systems must also have held Arctic grayling populations before and must be nominated by local groups including Trout Unlimited chapters, NGOs, township boards, city or county governments and tribal governments.

“We are limiting the scope of our reintroduction efforts to just those systems and watersheds where we know that Arctic grayling existed in significant numbers prior to their extirpation from Michigan. That limits us to the Northern Lower Peninsula streams,” said Eisch. “There is still much to be done before the first eggs are stocked into the instream incubators, while research and field staff have a lot of habitat evaluation work to do to ensure that truly informed decisions are made as to which watersheds to target for the reintroduction effort.” 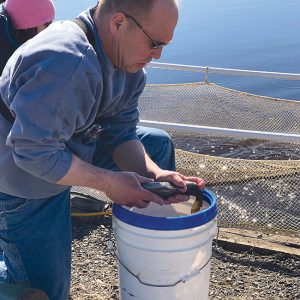 Jim Aho, Marquette SFH manager, checking to see if the fish are green or ripe – ready to spawn or not – in preparation for the egg take. 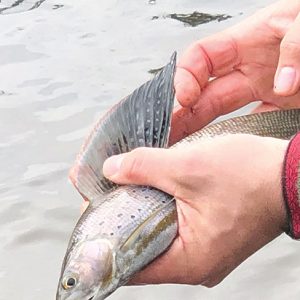 Building current knowledge
Encouraged by Montana’s restocking efforts, which have been continuing for over a decade, Eisch and his team are following this model throughout. Montana’s work shows that stocking eyed eggs into instream incubators appears to be more effective than stocking advanced life stages (fall fingerlings and beyond), most likely due to very early, critical imprinting that happens immediately after hatching. Research is also underway into Arctic grayling interactions with brown trout and brook trout with respect to predation and competition. Work by PhD candidate Nicole Watson at MSU indicates that brown trout can have a depressive effect on Arctic grayling success but the same doesn’t appear to be true with brook trout. In fact, data from Montana suggest that Arctic grayling tend to thrive in the same waters as brook trout.

Thanks to the huge amount of support the initiative is receiving, the number of partners involved and the diversity among those partners, Eisch and his team are delighted that things are moving forward.

“We intend to develop three years of broodstock as the foundation of this program,” said Eisch. “This will allow us to practise rotational year crosses so as to avoid having siblings or half siblings spawned together. The initiative is not seen as an ongoing stocking program that relies on supplemental stocking long into the future. Rather, we intend to establish self-sustaining Arctic grayling populations that are reproducing naturally. Although this is many years off, we would love to see those populations reach the point where some level of recreational fishery could exist.”