MIAMI, Fla. – It's time for the aquaculture industry to realize its potential for sustainable food production to answer the growing demand for food of an increasing world population. 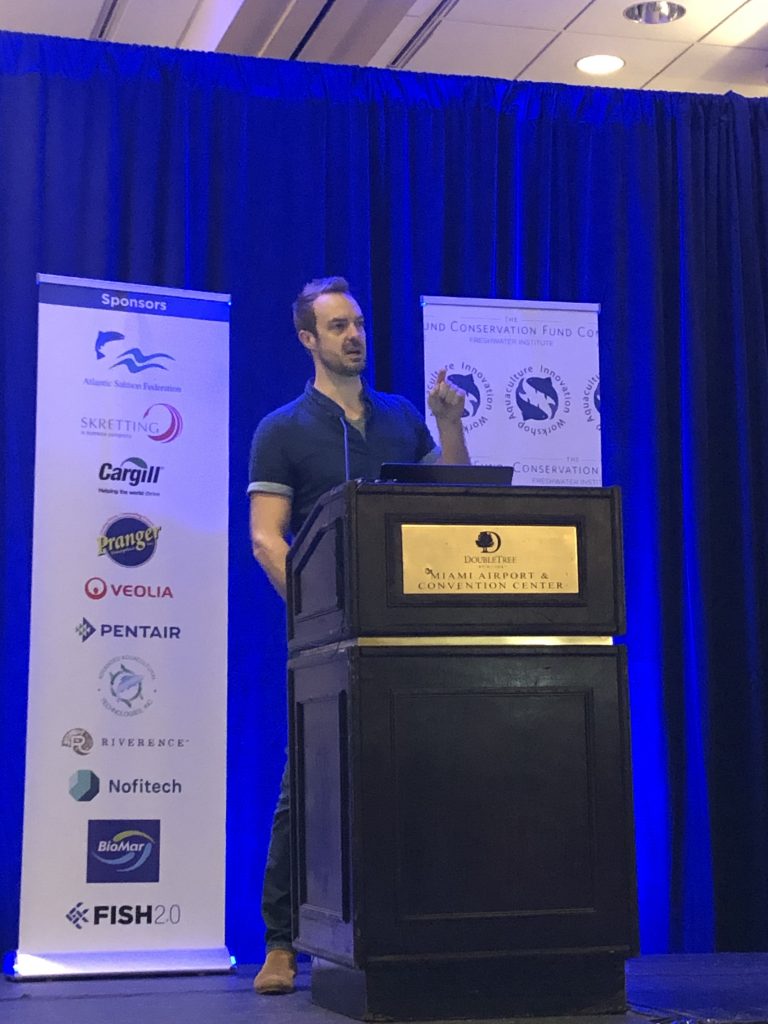 This was the overarching message from some of aquaculture’s most avid advocates in the food industry at this week’s Aquaculture Innovation Workshop (AIW) in Miami, Florida, U.S.A., hosted by The Conservation Fund’s Freshwater Institute.

“Seafood bears the albatross of being guilty before proven innocent,” according to executive chef and sustainability advocate Barton Seaver, in his keynote address at the AIW.

He points out the lack of public education about aquaculture and the bad reputation the industry has endured over the years, do not do justice to the potential of aquaculture to help solve the world’s food supply challenges in a more sustainable way.

Barton commends the innovations transpiring in the aquaculture industry, particularly the movement toward more sustainable seafood farming practices, saying this needs to be front and centre in public messaging.

Barton, who founded Coastal Culinary Academy in Portland, Maine, U.S.A., also called for more content around seafood in culinary education, saying chefs and cooks are not being educated enough on seafood and aquaculture. With statistics indicating that two out of three meals a day are eaten outside the home, Barton says chefs are the “perfect pathway by which we accomplish our goal of increasing seafood use across demographics.”

“We should portray seafood and its production as a principal catalyst by which we create food systems designed to make people thrive, and aquaculture is the key to this,” he added. “My challenge to you is to envision seafood not as a product category but as a frontier for sustainability; our means to fix people and fix food systems.”

One food industry executive echoed Barton’s call for the aquaculture industry to take control of the messaging around seafood and seafood production.

“(Seafood does) not have an awareness problem in the U.S., at least; it’s a product and placement problem,” said Jacqueline Claudia, CEO and founder of frozen seafood brand Love The Wild. “Most people, when they go to the grocery store, don’t even go to the seafood section.”

Love The Wild promotes sustainably farmed seafood through its off-the-shelf packaged products. Claudia says today’s seafood products are not being sold in a way that speaks to the consumers and responds to their needs.

“First, it needs to taste good. All of the potential of aquaculture is unrealized if people don’t eat it,” Claudia said.

Price of sustainability
Pricing for sustainably farmed seafood is also a challenge if the industry were to promote increased consumption of seafood. Seafood farmed in land-based production systems or in ways that reduce its environmental footprint has a premium attached to it and that, according to Claudia, can spell the difference in consumers’ buying choices.

“We need to be competitive (with pricing). Unless we can really address the cost of growing fish we are going to have a really nice niche business, but we are not really here to create a niche business,” Claudia said.

She added, “I understand putting a premium on price of seafood, but premiums have got to go away. We have to be competitive with other animal proteins.”

Perhaps, this might be happening soon. Industry observers believe as companies with sustainable systems increase production capacity overtime, premium pricing will go away. Producing Atlantic salmon on land at higher volumes, for example, might help with the pricing challenge.

All eyes in the industry are on Atlantic Sapphire, as the company ramps up construction of a massive land-based, RAS salmon farm in Miami, Florida. The project is being done in three phases, with phase one bringing the company’s production capacity to 10,000 metric tons by third quarter of 2020, and will scale to more than 60,000 metric tons by 2026.

“We are bringing the farm to the U.S. consumers, eliminating air freight requirements,” said Jose Prado, chief financial officer at Atlantic Sapphire, in his presentation at the AIW. “Atlantic Sapphire’s vision is to evaporate the need for airplanes (in transporting fish to market).”

Although it is the biggest, so far, in expected volume production, Atlantic Sapphire isn’t the only company investing in land-based salmon production that are gaining momentum. Superior Fresh, which uses aquaponics to grow Atlantic salmon and leafy green vegetables, was the first to grow Atlantic salmon in a RAS environment in the U.S. hitting the market last July. It currently grows 100 metric tons of salmon (which it plans to expand to 500 metric tons) and 1,000 metric tons of leafy greens.

“The capital expenditure is very high for Atlantic salmon, but with two businesses together (greens and fish), we make it work,” said Steven Summerfelt, Superior Fresh chief science officer. “We didn’t want to do a 5,000-tonne salmon farm… we are a green leaf company with a serving of salmon on the side.”

Swiss Alpine Fish, the only Atlantic salmon producer in Switzerland, grows its fish on land using the RAS2020 technology and aims to produce 600 metric tons of salmon in freshwater. Matorka, the biggest land-based salmonid farm in Iceland, is currently harvesting 20 metric tons of Artic Charr per week and will start harvesting salmon trout in 2019. It aims to produce 3,000 metric tons of fish by 2020 and double production capacity by 2023, according to the company’s CEO Arni Einarsson. Idealfish, in Waterbury, Connecticut, U.S.A., produces 150 metric tons of branzino or European seabass (Dicentrarchus labrax) per year in a RAS environment. Kingfish Zeeland, producer of Yellowtail Kingfish (Seriola lalandi) in the Netherlands, has reached 80 percent of its projected land-based production capacity of 520 metric tons per year. The company is currently exploring potential sites for a land-based production facility in the U.S. to bring its product to the North American market.

According to Tone Bjorstad Hanstad, equity research analyst for seafood with DNB Markets, an investment bank in Norway, there are more than 30 land-based aquaculture projects currently underway and 350,000 metric tons of fish in production as of November 2018. Improvements in RAS technology is contributing to the growing number of land-based projects, she added.

The growing number of sustainable aquaculture production systems across the world has investors taking a new interest in aquaculture, according to Monica Jain, founder and executive director of Fish 2.0, a network of investors and entrepreneurs aimed at growing the sustainable seafood sector.

“Innovation and disruption are at the heart of why the field is growing and why interest in private investors is growing for aquaculture,” Jain said.