Criticism has been leveled at Alaskan salmon hatcheries in 2018 over concerns regarding the effects of interactions between wild and hatchery salmon. Along with other groups, the Kenai River Sportfishing Association has raised concerns over negative impacts from such interactions, in light of “the sheer magnitude of hatchery pink salmon releases in the Gulf of Alaska.” Alaska’s program is primarily focused on supplementing the wild fishery. 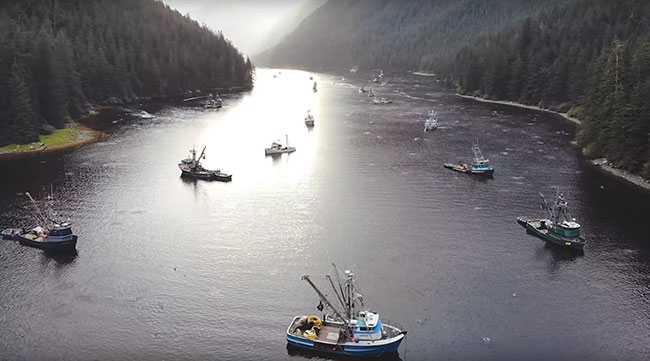 The white spots in this shot of an Alaskan river are salmon leaping from the waters. Concerns have been raised over the effects of interactions between hatchery and wild salmon in the state. Criticism has been leveled at Alaskan salmon hatcheries in 2018

Tina Fairbanks, executive director of the Kodiak Regional Aquaculture Association, told the Kodiak Island Borough assembAly of a “campaign to undermine support” enacted by advocacy groups speaking against the hatcheries at Alaska Board of Fisheries meetings in 2018. While there are issues being raised that are valid to explore, she says she believes that some of the critics will never be satisfied.

“I think that there are also people who are convinced at a basic level that hatchery programs must be bad,” says Fairbanks.

Steve Reifenstuhl, general manager of the Northern Southeast Regional Aquaculture Association, says these concerns are already being examined by a state science panel.

“If we find a deleterious effect we may have to modify programs,” says Reifenstuhl. “But at this time I don’t see where we need to change anything.”

Bill Templin, chief fisheries scientist with the Alaska Department of Fish and Game, describes the state as “somewhat data limited,” but says they are working hard on collection and analysis.