Features Profiles
Airburst system blows out the crappie at US hatchery 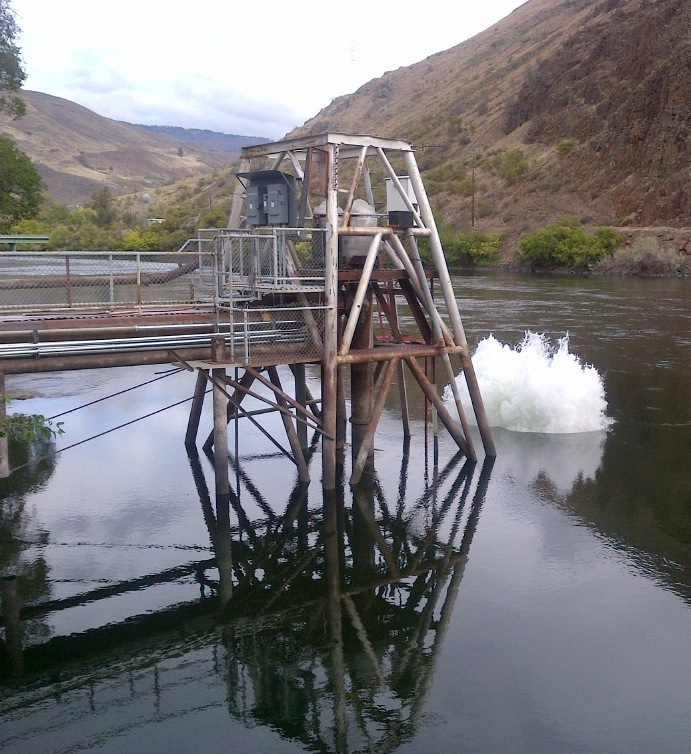 Maintaining facilities and up-grading them to current standards is a on-going challenge for older hatcheries. Often, major refits are necessary, as was the case for Oregon’s Oxbow Fish Hatchery when it was time to enhance their water intake screening system.

Oxbow Hatchery was originally built in 1961 by the Idaho Power Company.  The hatchery is part of efforts to mitigate the blocking of salmon and steelhead passage up the Snake River by the Companies’ Hells Canyon hydro electric dams.

Water is provided to the hatchery by two 75 hp intake pumps that draw water from the Snake River. “Originally, the river pumps had no screening system,” explains hatchery manager Jeffrey Seggerman.   “Probably about 10 years ago, a course bar system, with 2-inch gaps, was added to filter out large objects that could damage pump impellors.”

“The river water is usually pretty clean,” Seggerman adds.  “But small crappie and catfish would often go through the pumps and fish parts would end up in the steelhead broodstock holding ponds.  The fish viscera created a biosecurity risk.”

The upgrade was also prompted by NOAA’s (National Oceanic Atmospheric Administration) protection of Bull Trout.  “We needed to find a screen that met NOAA’s criteria to exclude Bull Trout fry from getting entrained in the pumps,” says Seggerman.  NOAA actually stopped Oxbow from raising Chinook smolts until the problem was fixed.

The initial design of the new hatchery intake, was completed by CH2M Hill Engineering.  “After conceptual designs were reviewed the conclusion was that a tee-screen type intake would be the best retrofit of the existing structure,” explains Ryan Adelman, engineer with Idaho Power.

“This specification could have been met by a number of vendors including Hendrick, Cook Legacy, Johnson and ISI,” says Adelman. The Cook Legacy, (A Unit of Norris Screen) tee screen that was selected by the contractor, included an airburst cleaning system.

• Contractors reinforced and lengthened the existing pump platform by driving new pillars in the river bedrock.

• Divers attached a pump can, horizontal header, 45-degree elbow and the tee screen, to the two existing pump shafts.

• A 24-inch emergency bypass valve was attached to the horizontal header.

• New power conduits and lines were linked to the compressor building, back out to the existing pump platform.

• Electrical disconnects for the pumps at the platform give added safety.

• A 4-inch diameter pipe from the compressor building supplies air to the backside of the tee-screen.  A small diameter stainless tube was added adjacent to the air pipe for differential pressure sensing.

• The PLC was connected to the existing hatchery alarm panel in the main office building.

Two scheduled air bursts per day have kept the screens from plugging up. Algae can be a problem in late spring and summer, though the screen has a “Jacquelyn” (Trade Marked name) coating.  If needed, air bursts can be triggered manually, or programmed to go with differential air pressure sensing.

“The system is in the second year of use, with no problems,” concludes Seggerman.  “It’s worked great and has fairly low maintenance.”