At one time, the production of post-larvae local prawn was a significant driver for both of the southeast Asian nations of Myanmar and Bangladesh. Nearly a decade ago the two nations had more than 100 hatcheries between them. Today, only a handful remain. 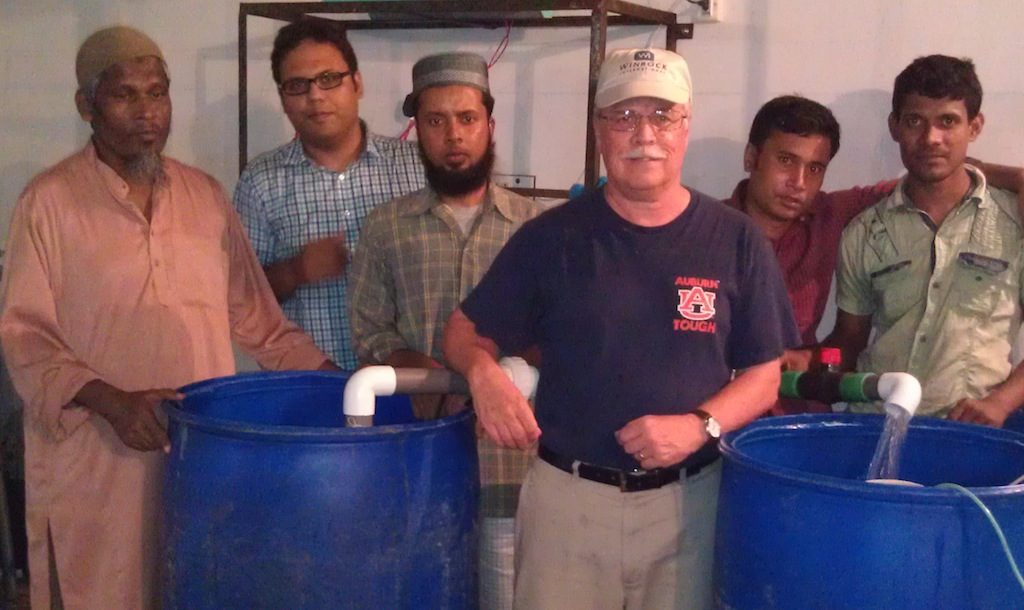 Hatcheries in both nations have struggled with high-larval mortalities and inconsistencies in production which have caused significant economic losses. Bill Daniels, an associate professor with Auburn University’s School of Fisheries, Aquaculture and Aquatic Sciences was asked to evaluate the problems and identify solutions by the firm which manages the farms, Winrock International.

“The first time I was there, I visited three hatcheries that were in production and took a quick at their overall management and feeding practices, looking at the source of the water and how they were running their hatcheries,” says Daniels. “I gave them some feedback and from there I went back and worked with one particular hatchery under the Farmer-to-Farmer program, to see if we could train some of the managers and solve some of those issues, which were mostly management issues.”

The majority of Daniels’ work took place in Myanmar, as it was during the rainy season when he visited Bangladesh and the hatchery was not in production. But he says that most of what he observed in Myanmar would still be applicable in Bangladesh. Daniels says that while no evidence of viruses turned up in water samples, he’s not willing to completely rule them out. However, he said the biggest water quality issue was actually a management issue.

“They seem to do a good job cleaning everything up and chlorinating the water before it goes into the system,” says Daniels. “But once it’s in the system, they’re relying mostly on a water exchange regime – they put the water in; they use it for a while and they exchange it. They’re not always monitoring things like ammonia and they’re not doing a good job of removing solids from the water. And those organic solids can lead to higher bacteria loads, usually the type of bacteria that can be pathogenic to the system.”

Another issue was under-feeding, which results in a longer larval cycle and an increased risk to developing larval immune systems. In other cases, Daniels observed over-feeding of artemia.

“Artemia are sitting in the tank, they’re getting bigger and they’re losing their nutritional value,” says Daniels. “They become almost like eating cardboard, they’re not providing the nutrition to the larvae.”

During one of Daniels’ trips to Myanmar, he helped convert a static water system into a recirculating system which would continuously clean the water of solids and dissolved nitrogen. He also helped implement new management practices, in particular for feeding. Unfortunately, the hatcheries have not seen a significant upturn in the time since.

“They’re still seeing the problems, which is often because they’re only implementing part of what was suggested and not solving the problem,” says Daniels. “There are some limitations in Myanmar, as far as where they can get the water. Both countries are mostly collecting broodstock from the wild. Which means that the broodstock are carrying any diseases they already have into the hatchery. They do a lot of things correctly, but if you’re missing pieces of the puzzle you end up not getting good success.”

Daniels also helped the Bangladesh Fisheries Research Institute convert a static tank into a recirculating system. The institute is currently in the process of adding a protein skimmer to that. Daniels says WorldFish is also working with a number of Bangladeshi hatcheries to convert static systems into recirculating systems.