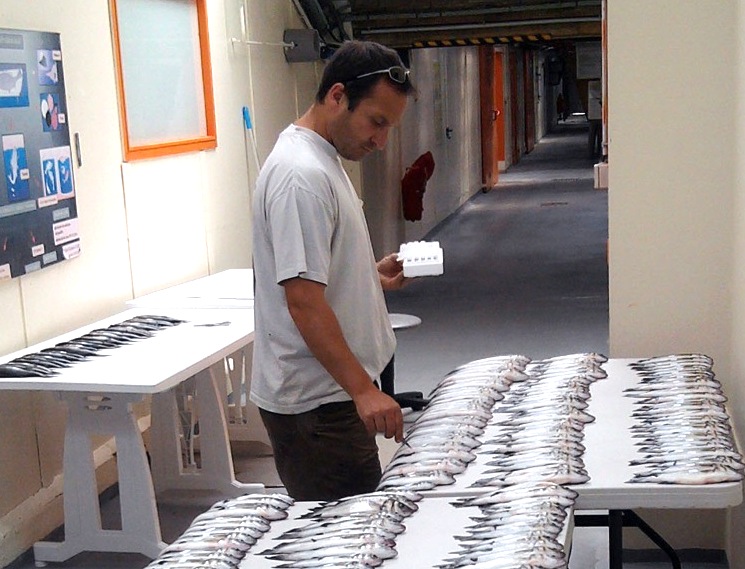 The formulations of aquafeeds have evolved significantly over the past 30 years; terrestrial plant-derived products are gradually replacing fish-meal and fish-oil, the production of which has remained almost stable over many years.

However, feeding diets containing very high levels of vegetable oils and meals can lead to reduced growth and health degradation among salmonids and other marine fish. On the other hand, since the 1980s, fish breeding programs have produced strong genetic gains for growth- health- and quality traits. Thus, an important issue for fish breeders now is to understand the consequences of the evolving dietary changes on both current and future selected cultivars, and to adapt breeding programs accordingly.

To identify solutions to this issue a large project named VEGEAQUA was funded by the EU and a number of organizations and industry groups in France.

Several trials were set up in both research facilities and commercial hatcheries with the objective of obtaining a better understanding of the interaction between breeding programs and diet composition, and accordingly adapt appropriate  strategies for the genetic improvement of rainbow trout (Onchorhyncus mykiss), seabass (Dicentrarchus labrax), sea bream (Sparus aurata), and meagre (Argyrosomus regius).

These trials focused on comparing a diet (M) containing marine products  with diets (PB) containing only, or mostly, plant-derived products.

The researchers investigated the possible effects of the different diets on the heritability of the main traits of economic interest, as well as the importance of genotype by diet interactions, which may cause families to be re-ranked according to the diet used. We also sought what can be the origin of the variability for the ability to use the PB diet and proposed scenarios for the future evolution of breeding programs.

INRA and Ifremer have reared rainbow trout and sea bass respectively to estimate genotype by diet interactions between fish fed either a diet containing marine ingredients (M) or a diet containing only plant-based products (PB). Fish were tagged individually with Passive Integrated Transponder (PIT-tag) and DNA samples were collected for parentage assignment.

The trials confirmed that the substitution of marine ingredients by vegetal ones decreased growth and modified the lipid content of both species, and lowered the survival of sea bass, and to a lesser extent of rainbow trout. But, the estimates of heritability for weight, growth and processing traits (carcass, viscera, head, and fillet yields were measured only on trout) of fish fed with the PB diet were high in rainbow trout (0.69; 0.65; and 0.21-0.58 respectively) and weak in sea bass (0.18 and 0.11).

These heritability estimates were higher for rainbow trout and lower for sea bass than those obtained when fish were fed the M diet. For these traits, genotype by diet interactions were moderate, and the genetic correlations between the M and PB diets were variable in trout (0.67-0.90; 0.92; 0.65-0.96, for weight, growth and carcass traits respectively) and sea bass (0.51-0.96; 0.64 for weight and growth), but could involve important family re-rankings according to the period of survey.

All these estimates indicate that high genetic gain can be obtained for the ability to grow on a totally plant-based diet. To confirm this result, INRA performed an experimental selection for this trait in rainbow trout. Brood fish were selected for their ability to survive and grow when fed a totally plant-based diet from first feeding (S). They were compared with unselected (C) broodstock fed a marine diet.

Observing the offspring of S and C parents, the measurement of the response after one generation of selection for the ability to survive and grow when fed the PB diet confirmed the results, and provided high genetic gains for body weight (+ 35%), survival rate (+ 15.1%) and biomass produced (+ 54.4%), without any effect on processing traits (carcass, viscera, head, fillet yields).

The researchers showed that this ability was associated with modifications in the lipid metabolism, but they failed to establish links with feed intake or feed efficiency from this trial on the first generation. Higher mortality rate and lower body weight in the PB-fed fish appeared during the first days following distribution of the PB diet, and, stronger family re-rankings in early steps of the survey indicate that the early stages play a key role in the ability to use plant-based diet at both phenotypic and genetic levels. Further insights dedicated to these particular stages are strongly needed.

For each of the four species of the project, two batches of individually tagged animals were reared, fed either a standard commercial diet, or a diet containing mainly plant-origin ingredients (plus 2% fish meal and 2% fish oil).

Trout, sea bass, sea bream and meagre were reared in the facilities of Bretagne Truite, Ecloserie Marine de Gravelines, la Ferme Marine du Douhet and Les Poissons du Soleil respectively. Fin samples were collected for DNA extraction and a posteriori parentage assignment. Phenotypic measurements were performed focusing on growth and processing traits (gutted yield and filet yields). Analyses of the results are close to completion, and the researchers observed moderate h2 for the traits examined when fish were fed the plant-based diet, confirming that genetic improvements can be achieved. Preliminary results yielded different results depending on the species, and complementary analyses will help to illustrate the experimental trials.

Based on these results, it seems possible to exploit the great plasticity of some fish species to design breeding programs that take into account a changing dietary environment. Given the global limitation in food resources, genetic improvement of fish brood-stock could be a useful lever to facilitate dietary transitions.

About the authors: Richard Le Boucher was a PhD student in INRA-Ifremer and is now CEO of Genotop (www.genotop.com); Mathilde Dupont-Nivet is research scientist at INRA, and Marc Vandeputte, research scientist at INRA-Ifremer in Palavas-les-Flots, and the scientific coordinator of the VEGEAQUA Programme. For more information contact Marc at: marc.vandeputte@jouy.inra.fr; or Richard at: leboucherrichard@yahoo.fr.