Norwegian commercial copepod producer C-FEED is proving success in transitioning research knowledge to industrial application. This year, C-FEED has signed its first commercial scale copepod supply contracts and is aiming for a turnover in the region of 30 million NOK (roughly US$4 million) in 2019. C-FEED is a spin-off company of Norwegian research firm SINTEF. 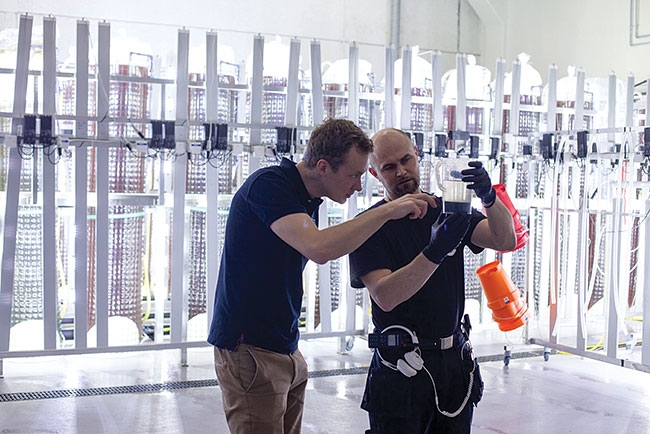 With the persistent need for high quality live feed for early larval stages of marine species, C-FEED aim is to enable the production of new aquaculture species that has previously proven difficult to rear by introducing copepods as a full or partial replacement for traditional live feed organisms.

In 2016, C-FEED completed the construction of the world’s first industrial copepod production plant in Trondheim, Norway. Since then, the company, has provided both national and international clients with copepods to help them improve larval production of marine fish.

The copepod, a marine micro-crustacean, is produced in a closed-cycled and bio-controlled system. The new production plant produces over 20 billion copepod eggs every month and 20,000 liters of live marine microalgae every day.

“The interest for copepods as feed for marine larvae has been around for decades, but this is the first time that someone manages to produce it in industrial quantities,” says Björn Ronge, chief marketing officer at C-FEED.

Since C-FEED started large scale production of copepods, a lot of focus has been given to the development of new, improved feeding strategies for marine larvae in cooperation with its clients.

“When feeding with copepods, multiple production parameters can change, such as increased speed of growth, higher survival of larvae and increased activity of the fry. All those things are positive and sought-after features when rearing fish larvae and need to be addressed in advance as the robust larvae can show different behavior and significantly lower mortality rates.

“Also, we need to adapt the protocols and make them as easy as possible for the hatchery personnel to implement, as they are usually on the limit of their capacity already and don´t want any extra workload,” Ronge says.

Today, C-FEED is working with clients in more than 15 countries on 20 different marine species of fish and shrimp. New requests for trials with copepods are coming in on a daily basis, the company said.

For example, Japan’s largest and most prominent bluefin tuna producer, KINDAI, has started using copepods for its larvae this year and the demand from tuna production will most likely increase drastically in the near future, the company said.

“The demand for copepods is accelerating as the knowledge of the benefits from feeding them to marine larvae is spreading. We steadily collaborate with new clients around the world, show them our system and set up trials. It feels like no one wants to miss out on this new development,” Ronge notes.

“The bottleneck for C-FEED right now is to find the perfect feeding strategies for different larval species, and such experimental trials can last more than a year for each run. This means the time frame for feedback is slow and therefore a quick market penetration is demanding.”

C-FEED is continuously working on improving both biological and technical aspects of its production and process automation of labor intensive tasks, to further increase the supply capacity and reduce production costs. Several of these improvements have been realized through the ongoing research and development project, “Copepods in Aquaculture,” financed by the Research Council of Norway and currently being spearheaded by SINTEF Ocean.

The project manager, SINTEF researcher Andreas Hagemann, says, “After more than a decade of research on both intensive copepod production and the effects of using copepods as live feed for early life stages of marine fish and crustaceans, we’re glad to see that the transfer of knowledge from research to industry can be so successful. We will continue working closely with the industry to further assist in all aspects of industrial copepod production.”